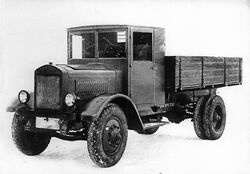 JSC "Autodiesel" (Yaroslavl Motor Works), YaMZ is a Russian engine-building plant in the city of Yaroslavl.

The factory was founded in 1916 Russian industrialist V. Lebedev under the government program to create a Russian automotive industry. It was organized as a joint-stock company to produce cars under license from the British firm Crossley Motors. It was planned to produce 750 cars and trucks a year with a 4-cylinder engine volume of 4478 cm³. There are indications that a foreign construction was planned, but until 1917, the plant was not gained - there is information about the release of only one car - " The Swan " ( " Swan-A "), moreover it is possible that it was built in the UK.

After the Revolution, it was the first statesman repair plant. In 1925, it started production of trucks with motors AMO-F-15 . [1] In 1926 the plant was reorganized as Yaroslavl State Automobile Plant No.3.

During the First Five-Year Plan was reconstructed: the construction of new plant, the number of employees has increased by 5 times. The plant first in the country has mastered the production of heavy-duty trucks . Since 1933 its name - Yaroslavl Automobile Plant. In 1935, it released its 10,000th truck.

In 1971, the Yaroslavl Motor Plant has become the leading enterprise production association "Autodiesel", in which in addition it included YAZTA , YaZDA , TMZ , Rostov Aggregate Plant , Construction and Assembly Trust and State Farm "Revolution", and later TERZ . In the years 1973-1980 created a family of diesel engines YaMZ-840 . In 1975 the plant was awarded the Order of the October Revolution . In 1976 he was awarded the Lenin Prize for the development and commercial production of engines for tractors "Kirovets" K-700 and K-701 . Power unit created in the years 1977-1979 YaMZ-642 for the Kutaisi Automobile Plant .

In 2001 JSC "Autodiesel" (YaMZ) became a part of RusPromAvto transformed later in the GAZ Group.

Products of the plant are: