The Wright Eclipse Gemini is a type of double-decker bus body built for Volvo B7TL and later Volvo B9TL and Volvo B5L Hybrid for use in the United Kingdom.

Wright launched the facelifted version of the Eclipse Gemini in 2006, soon after the introduction of the 2-axle Volvo B9TL chassis in the same year.

The Eclipse Gemini 2, with front and rear ends facelifted to match the Gemini 2 integral, was first built in 2009.

Wright Eclipse Gemini-bodied buses have been mass-introduced into London since 2001, where they replaced types such as the Routemaster and Leyland Titan (B15). It is also popular with FirstGroup, with over 1,000 buses being put into service with the group.

Dublin Bus and Bus Éireann in the Republic of Ireland also acquired some Volvo B9TLs with Wright Eclipse Gemini bodywork.

The Eclipse Gemini 2-bodied buses had also been sold to Kowloon Motor Bus and Citybus of Hong Kong and SBS Transit of Singapore, bodywork for the latter are locally assembled.

The Gemini has both the upper and lower deck front windows forming part of a single oval shape, with the destination blind in between. In London, they often have two doors for passenger loading, one at the front and one in the centre. The staircase is situated across from the centre entrance. The staircase itself differs from other modern buses as rather than simply having a banister, the Gemini features a glass panel underneath the handrail, giving a stylish appearance. All Eclipse Geminis are fitted with LED rear lights, and although London and Lothian models retain "power blinds" (electrically operated traditional destination boards), most have LED destination screens (as is common with most buses nowadays) versions are available. As is common on most new buses, stop request buttons appear on both floors and should these be pressed, the word "Stopping" appears in green on a black glass effect panel, much more streamlined than the traditional box housing. The interior of the Gemini features curves similar to its exterior, and continues the modern feel.

The facelift on the facelifted version of the Eclipse Gemini is largely confined to the rear of the body, where it has a more rounded appearance and centralised LED route number panel, housed within in a smoked glass effect panel underneath the upper rear window. Other external modifications include the relocation of the rear number plate from its integrated position with the upper rear window to a more conventional siting at the bottom of the bus.

Internally, the facelift consists of an extension of the driver guard panel to include the On-Bus vault (passengers now must put their hand through a gap in the panel to reach the vault) and a slightly modified staircase separation wall, which now features a glass panel, presumably to improve the view of passengers sitting in the seat directly in front of the wall. 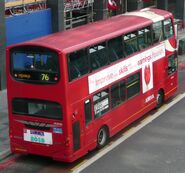 The rear of an Arriva London Wright Eclipse Gemini at Waterloo.


Retrieved from "https://tractors.fandom.com/wiki/Wright_Eclipse_Gemini?oldid=184818"
Community content is available under CC-BY-SA unless otherwise noted.