Tractor & Construction Plant Wiki
Register
Don't have an account?
Sign In
Advertisement
in: Companies of the United Kingdom, Defunct companies, Steam,
and 7 more

William Allchin was a manufacturer of steam engines, founded in 1847 based in Northampton, England.

William Allchin founded an engineering business at the 'Globe Works' by the River Nene in Northampton in 1847. By 1890 when the founder died, the firm had was well known for the manufacturer of steam engines and saw benches. The firm built its first steam engine in 1872.

The firm became William Allchin (& sons) Ltd in 1900 when the firm became a limited company and they then specialised in steam wagons and traction engine manufacture. They stopped building steam engines by 1925. Having only built about 220 over the past 50 years !

By 1930 the firm had closed down, but they were not part of the ill fated AGE combine that brought many firms down, just a victim of the depression of the 1920s, and its effect on the farming and related industries that were their customers.

Frank Allchin set up on his own account at St James' Foundry, Weston Street, Northampton, as Allchin, Linnell & Co in the 1880s. This firm produced a wider range: there were some steam engines, but as important were engineering fittings, machine tools, and steam roundabouts and other fairground rides. 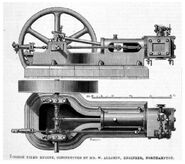 (no Information yet, please add if you have any)