Whitlock Brothers Limited was a company based at Great Yeldham in Essex and they were founded in early 1899. The firm built the Dinkum Digger loader under licence from the inventor a Scotsman, Robert Ewan, from Fife. The Dinkum was as backhoe attachment for Fordson and Ferguson tractors. Next was the Dinkum 60 and Dinkum Major built on a Fordson Major base unit. A similar solution being equally adopted by Bray, Weatherhill and several other British construction machinery makes for backhoe loaders and diggers they offered.

This manufacturer should not be confused and had no connections with another firm of the same name called The Whitlock Automobile Company Limited who built taxis and car-type light vehicles who were active at Cricklewood Broadway in London, England from 1905 to 1910 with another return in 1924 but then closed during the 1930 Great Depression.

They were exported to Australia, in 1958 being imported and sold by their agent Lougth Equipment PTY.[1]

They also started building an early ADT in early 1954 called the Whitlock DD95 based on a Fordson tractor. The dumper was an 11 ton unit with a 95 hp tractor with 6F + 2R manual gearbox. A lower powered version the Whitlock DD75 was also built. Later in 1963 came the Whitlock DD105 4WD Hydrostatic dumptruck model with a 105 hp transverse engine and a 12 ton capacity and could have a connectable rear axle drive or both axles driven. This was not a big seller but was considered well ahead of its time just like other UK firms such as Bray, Camill and Northfield who later introduced similar products.[2]

The Whitlock company was taken over in 1972 by Powell Duffryn, owner of the Hymac company, for £1.2 million. Another engineering firm called Merton Engineering Co. Limited who also built Ford based loaders was also part of the Powell Duffryn operation having being acquired by Hymac in about 1970. The loading shovel models were marketed as Whitlock-Merton for a time under the Hymac division of Powell Duffryn.[3]

The Whitlock backhoe-loader range was incorporated into the Hymac line-up model range too to complement the 360 excavator range of original Hymac design and production. All Whitlock manufacturing was moved to the Hymac factory at Rymmny in Wales in the mid 1970s and the site taken over by the new Volvo UK operation. This marked the end of Whitlock Brothers Limited, and by 1976 Whitlock had left the construction and earthmover machinery within months.[4]

1971 Whitlock, maker of earth movers, was sold to Powell Duffryn which would integrate it with Hy-Mac[2]

The company in the 1940s was involved in building early on farm grain storage silos. These were introduced following a visit to Canada by Mr Charlton Whitlock were he saw the silos built of timber. The tall Canadian designs being adapted to UK conditions and refined by trial and error.[5] The shrinkage gaps in the timber structure also allowed air to circulate, whereas the later steel paneled silos tended to suffer from sweating, till ventilated /perforated panels were added. 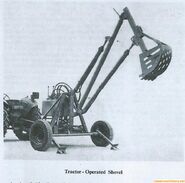 A 1950s original Whitlock Brothers Dinkum Digger for any Farmtractor 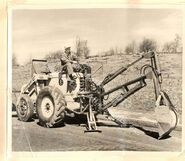 A 1960s Whitlock Brothers DD70 ADT Diesel working in a mine 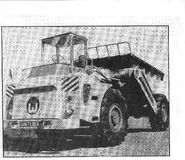 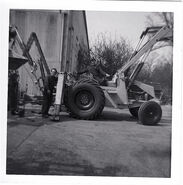 A 1960s Whitlock Dinkum Digger outside the factory being tried 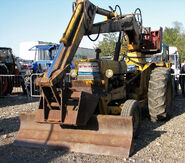 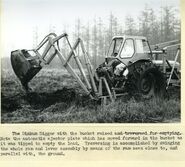 A 1970s Whitlock Fordson Digger Loader working in a Golfcourse 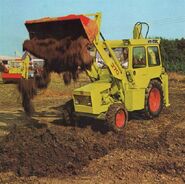 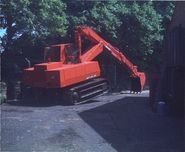 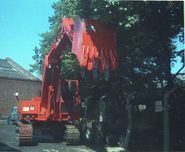 The Whitlock Brothers Limited the whole story about this British company

Outside the Whitlock Brothers Limited factory with some staff

An Original Whitlock Brothers Limited nameplate on a ADT

An Original Whitlock Brothers Limited Catalogue with their address

please add your photos below of surviving Whitlock machines; 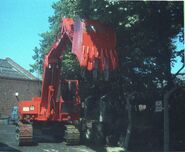 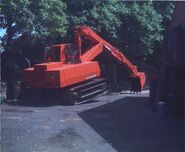