This is a F.E. Weartherill 42HD Wheeled Shovel Loader.

Fitted with a Perkins engine. With Front Wheel Drive and Rear Wheel Steering. The Torque Converter had 2 forward and 2 Reverse Gears. The Bucket's capacity was 1,250 KGS, but actually the machine was only rated at 2000lbs.

One was owned and operated by the British Fuel Company (Sheffield) Ltd. (shown below) 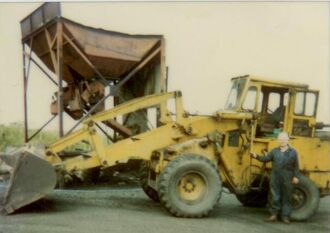 The Long Arms allowed very tall Coal Hoppers to be filled with ease, So Coalmen could bag up their loads more easily. Also there was no-problem loading High sided Tipper Truck even when they were fitted with Coke carrying Greedy boards.

This vehicle and it's older sister, which was lighter at the rear and had guards with slats in them to allow air cooling, and a rear fixed guard with slats for the radiator.

The Gentleman in the picture is my father John (Jack) Morrell, who was the Yard Foreman for the Depot.

We left the site in 1991 and the vehicles were sold in 1992 with closure of the Sheffield business. The Company merged with another and is now called CPL.