The firm of Weatherill was founded the late 1940s in North London by the Finance Director a Mr F.E. Weatherill formely of another similar company Chaseside.

Their machines were also designed on a Ford Skid unit like many others, but was designed as a hydraulic loader, as opposed to rope operated on the Chaseside. The first model was the H1 prototype, in 1950.

By 1954 F.E. Weatherill Limited the whole name of this company has expanded and larger premises required. They moved to Tewin Road in Welwyn Garden City, Hertfordshire just outside London.

In the early 1940s Fred Weatherill made his living as the financial director for Chaseside Engineering, who manufactured Fordson based rope-operated shovels.

While on vacation Fred saw a hydraulic wheel loader. He was so impressed with the concept that he decided to present the idea to the Chaseside board of directors, but they were not interested.

Weatherill was convinced that hydraulics were the way of the future and decided to establish his own company—FE Weatherill. The company was founded in Tottenham, North London, UK.

FE Weatherill created its first hydraulic loader in 1950: the 1H. It had hydraulically-operated arms, but relied on a trip mechanism to tip its bucket. The machine was based on the Fordson E27N Major tractor with a TVO and three-speed and reverse transmission. Its driver’s cab was located at the rear of the machine. The 2H had a similar loader-arm design, but incorporated a hydraulically controlled bucket. The 2H was based on a New Fordson Major Diesel with six-speed, two reverse transmission.

Weatherill’s next innovation was with its 4HTW machine, which introduced a second set of hydraulic rams. This allowed the bucket to pass over top of the machine to discharge material at the rear. This new design was introduced to improve loading in tight spaces.

The 42H was a front-wheel drive, rear steer unit. It was the first Weatherill model to use a Ford 590E engine coupled with a Brockhouse converter and Fordson drive axle. There were approximately 3,700 units produced by 1980.[2] The 42HD had a similar power and transmission design as its predecessor, but its arms were mounted in front of a high mounted cab.

The L61 used the same layout as the 42H, with the driver placed in front of the loader arm pivots. It was a rear steer machine with a Brockhouse transmission (later changed to a British Twin Disc) and powered by a Ford 590E six-cylinder engine. The L61B and L62B incorporated a new design for improved safety—it moved the cab behind the loader arm pivots.

The L62 and L64 both had pod-like cabs mounted at the front of the unit. These two units also marked the introduction of Weatherill’s own powershift transmission. The L62 was powered by a Rootes two-stroke diesel engine; the L64 was powered by an AEC six-cylinder diesel.

The L50, while a lower number in the sequence of the L-series, was not released until the late 1960s. It was a compact, four-wheel drive unit with a central mono-boom arm that pivoted in front of the driver’s cab. Its design has been compared to a modern-day telehandler. It was originally powered by a four-cylinder Ford engine, but later changed to a Perkins 4.236 engine.

In the mid 1970s the company introduced two larger articulated loaders: the L84 and L86. These two machines were designed for quarry and pit work. Both machines had front-mounted loader arms and were originally powered by Leyland integral head 500-series engines, but later changed to Leyland’s 600 and 680 engine models.

Weatherill also produced an S-series of loaders: the S1, S2 and S3. All three were compact, rear-steer machines powered by three-cylinder Perkins engines. These small shovels were used in factories and yards where space was limited.

[edit] The company shuts down

FE Weatherill began to face tough times by the late 1970s. Machines from Scandinavia, Japan and the USA were being imported into the UK and Weatherill could not match their prices. So, a few of the company’s leaders met with a government minister asking for the protection of UK manufacturers, but they received little support. The minister supposedly responded: “Gentleman, when the ship is sinking some of the cargo must be thrown overboard.”[3]

Weatherill closed their Welwyn Garden City plant and downsized 200 jobs. The company returned to its hometown of Tottenham with the plan of carving out a niche market for high lift two-wheel drive rigid loaders—the plan was not a success.

FE Weatherill shut down in the mid 1980s. At the time of the closure, Weatherill founder Fred Weatherill was still the figurehead of the company while both his sons (Anthony and John) also held key leadership roles.

FE Weatherill’s factory was a neighbor of the Lesney Company, who produced Matchbox toy vehicles. In fact, the Lesney factory sometimes delved into the Weatherill scrap metal bin for materials. 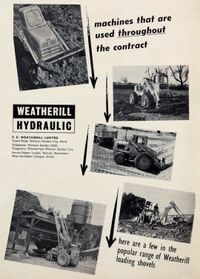 Details of engines, power, capacity and year of build etc required, to add to this updated list provided by former weatherill company employee.[1]

There are a few preserved, with a number still in use in coal yards around the country. A few still sit in the corner of the yard abandoned. But as sites get cleared and scrap prices rise are disappearing fast.They occasionally come up for sale in Classic Plant & Machinery Magazines for sale section, and other similar publications, or a clearance auctions going for scrap money. 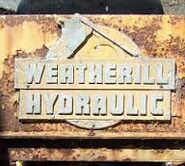 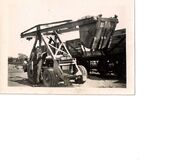 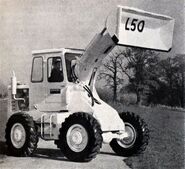 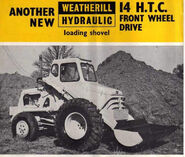 A 1970s Weatherill 62B 4WD Loader Diesel working in a quarry

A 1970s Weatherill L62B with a Leyland Marathon tipper

Another 1970s Weatherill L62B 4WD with a RVI dumptruck

Another 1970s Weatherill L64 4WD with a Leyland Beaver transporter

A 1970s Weatherill 42H Loader Diesel working in a quarry 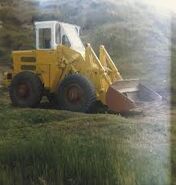