The Volvo Titan was a heavy duty truck produced by Swedish automaker Volvo between 1951 and 1973.

In the autumn of 1951 Volvo introduced its largest truck L395 Titan, with a payload capacity of up to 10 tonnes. The large VDF engine was replaced in 1953 with the further developed D96 engine. The following year, the Titan became the first Volvo truck to be offered with a turbodiesel.[2] In 1956 the truck was equipped with air brakes.

In 1965 Volvo introduced its "System 8". As part of the changes Volvo presented a successor to the Titan, called N88. The new truck retained the Titan's cab, but underneath it the conventional N88 sported all the news from the forward control F88.[3] These included a new engine, a fully synchronized eight-speed gear box and improved chassis and suspension. 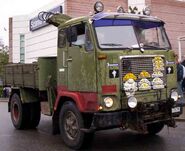 
Retrieved from "https://tractors.fandom.com/wiki/Volvo_Titan?oldid=183170"
Community content is available under CC-BY-SA unless otherwise noted.