Volvo soon realized that the company's first four-cylinder side-valve engine simply wasn’t powerful enough so the company brought out a more powerful six-cylinder engine for its automobiles and trucks.[2] The new LV60 truck was introduced in the summer of 1929. Apart from the larger engine and a four speed gear box it was identical to its predecessor, the LV Series 2.[2] 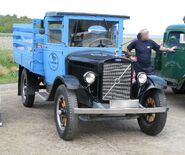 
Retrieved from "https://tractors.fandom.com/wiki/Volvo_LV60-series?oldid=183159"
Community content is available under CC-BY-SA unless otherwise noted.