In late 1993 Volvo had unveiled its replacement for the legendary F cabover series in production for almost 15 years.[1] The development of FH in what it appeared to be a clean sheet of paper design took seven long years. The development of all new design 12 litre engine with its overhead camshaft and electronic unit injectors technology took Volvo among the world's leading engine design ranks.

There were two models, FH12 and [Volvo FH16|FH16]] which shared common cabs and chassis and the FH12 immediately won "Truck of the year" award in 1994. The 16 litre engine, gearboxes and the driveline were carried over from previous generation albeit with many improvements and the host of additional features including all new Volvo engine management and its diagnostics for the D12A engine.

The cab produced at Umeå from hot dip galvanized, high tensile steel allowed for greater strength at thinner panels and box sections while reducing overall weight. The new FH cab was a logical progression from , for its days spacious but boxy F series cab to more aerodynamically efficient, with much improved ergononics and much better seating unit while reducing overall weight of the cab by almost 30%.[2] The cabin was exccesively tested in wind tunel facility to confirm shape aerodynamics properties to reduce air-drag thus improving fuel efficiency. The cab featured more sharply raked windscreen while wedge shaped sides rounded into front panel at much wider radius corners and the rear vision mirrors were also streamlined. The cabin was subject to the toughest cab impact test where procedure involved placing a 15 tonne static weight on the roof and one tonne pendulum striking at the cab rear wall and at the windscreen pillars , at the end of which the cab doors must be able to be opened.[3] In 1995 Volvo FH series became first heavy duty truck to be fitted with a SRS airbag to further improve passive safety.[4]

From the design angle the new D12A engine was the one of the largest engine project from Volvo Trucks since 1950s at the time. The basic design was still based on direct injection in-line six diesel engine around 12 litres displacement but with entirely different fuel and valve systems when compared with previous Volvo engines. Built at the purpose-built facility at Skövde on a fully automated line where the bulk of the engine assembly is done by robots and the final engine dressing is carried out manually. The D12A was designed as a "world engine" to be able to meet the latest demands in high power output, low fuel consumption and lower emissions with its single OHC camshaft design, four valves per cylinder and one centrally located electronic unit injector, integrated engine compression brake and two-piece, steel and aluminium pistons. The engine design left the door open for future upgrades in both power output and emission technologies.

VEB The Volvo Engine Brake is a compression type engine brake first introduced on D12A and since used on later designed OHC engines from 9 to 16 litre displacement. The brake operates on a principle where exhaust valve cam followers acts on secondary cam profile when engine brake is activated. Engine oil pressure is used to eliminate extra valve clearance thus this action forces the follower against secondary lobes and unseating exhaust valves temporarily to achieve so-called compression bleeding as employed by similar systems from Jacobs, Cummins and Mack however Volvo system has an extra cam lobe thus giving two openings of the exhaust valves and is designed to work in conjunction with an exhaust brake so two of the engine's four strokes are used to raise engine braking effect - Exhaust and Compression strokes.

In conjunction with introduction of FM series in 1998 [5], Volvo had facelifted existing FH series with minor modifications to the cab but major upgrade to the electrical system, engine and gearbox. The so called TEA Truck Electronic Architecture introduced a technical solution to possibility of various electronic control units to work and communicate with one another. The systems have been linked using two data buses or data links which allowed control units to exchange relevant information over the data network.

TEA is a computerized control and monitoring system which is used to control and coordinate the various functions of the vehicle main components. The control units communicate over what is known as Controller Area Network (CAN) at two speeds SAEJ1587/1708 @9,600 bit/s and SAEJ1939 @ 250,000 bit/s where up to eight Electronic Control Units were used to control various functions. J1939 data link is used for mission critical rapid communication among ECUs and J1587/1808 is used for diagnostic and programming link as well as "slow" communication e.g. for back up purpose. The new instrument cluster included a LCD panel to show information or diagnostic messages from the systems broadcasted via J1708 data link.

The original D12A engine was considered as a rather conservatively power rated and expectations of higher power output from such an engine design was always at the mind of not only designer but customers alike. The D12C differs from earlier version substantially with completely redesigned engine head , timing gears and addition of bottom end of reinforcement with a stiffening subframe to cope with increased power output to 460 hp (340 kW). ola

The gearboxes were based on previous SR1900 series and shared the same number of gears and gear change pattern. The SR2400 series gearbox was discontinued and replaced with the now same model shared across entire FH and FM range. Torque increase from 1900 Nm to 2500 Nm was due to changes to machining of the gears as well as use of the new type of narrower synchromesh mechanism allowing to increase gear width. The single control housing and the synchro mechanism reduced gearchange effort by about 50%.[6] The control housing was also identical for left and right hand drive versions reducing overall production cost and assembly.

In 2001 Volvo introduced the third generation of the FH and FM series with the cab and driveline given major makeover.[7] with an investment cost of 600 million euros [8] Major changes included redesign of the cab to improve aerodynamics , the new automatic gearchange transmission I shift , new electronics system and the engine improvements.

The changes to the cab included a new day cab , which is 150 mm longer with redesigned air intake and flat floor. New rear view mirrors were introduced to reduce blind spots and improve air flow , new headlights and front side marker lights, new split sunvisor and new wider front steps complemented the external modifications. The interior has been redesigned with more rounded edges around the dashboard , the new seats with integrated seatbelts and integrated telephone speaker and microphone with steering wheel controls for radio and inbuilt GSM phone were an option. As a standard equipment FH models also included FUPS (Front Underrun Protection System) to further enhance safety by preventing smaller vehicles from being "underrun" or wedged under front of the truck in an event of frontal collision.

(TMS) which contains two ECU's the transmission control unit (TECU) and the gear selector control unit (GECU). I-shift borrowed from old transmissions technologies like non synchronized main gears which allowed to reduce size and weight and a counter shaft brake to achieve more precise shift control while matching engine rpm to transmissions rpm e.g. TECU request the EECU to correct engine rpm as to synchronize the rpm so smooth gear change can be made aka double clutching in "old days".The main advantage of the system is in safety and comfort of an automated gear changes while driver can concentrate on "just driving".

After delaying introduction of new 16 litre engine for 2 years [4] in 2003 Volvo introduced one of the most most powerful trucks ever built. [10] The D16C engine was available in two power outputs configurations 550 hp (410 kW) and 610 hp (450 kW) and it was a completely new design similar in the lines of D9 engine introduced a couple of years earlier for FM series. The notable design changes included timing gears being on the flywheel side of the engine (rear mounted), design which allows for increased airflow around the engine , more precise injection and valve operation, noise reduction and manufacturing cost due to flywheel casing being used to house timing gears as well. In 2005 Volvo had increased the available power of D16C to 660 hp (490 kW) [11] respectively making in it one of the most powerful production truck available. Currently D16E engines are available in Selective Catalytic Reduction at power output 580 hp 640 hp 700 hp (520 kW).

In 2005 Volvo introduced new design 13 litre unit D13A [12] incorporating the same design features as its 9 and 16 litre engines and available in various power output variants from 360 hp (270 kW), 400 hp, 440 hp 480 hp (360 kW) to 520 hp (390 kW). Initially available to meet Euro3 emissions requirements, further improvements will enable the engine to meet or exceed Euro4 and possibly Euro5 emissions targets.[13] D13A featured closed-crankcase ventilation and also included a new type of unit injector (UI) E3 from Delphi.[14] As a part of makeover Volvo has also removed its naming scheme and decided to drop engine size in the model name so the models are known from now as FH only. Volvo had also introduced on D13A engine with Selective Catalytic Reduction an improved version of its engine compression brake the "VEB+" featuring additional helper rocker arm and a fourth cam lobe per cylinder. Power outputs available from 360 hp, 400 hp, 440 hp (330 kW) and 480 hp (360 kW).

In 2007 Volvo introduced D13B [15] with Exhaust Gas Recirculation configuration and VGT turbocharger but without exhaust particle filter and is the only manufacturer to offer this solution thus far. The engines are available in slightly reduced power output ranging from 360 hp, 400 hp, 440 hp (330 kW) and 500 hp (370 kW) and being shared with FM series however 500 hp (370 kW) option is only available for FH series.

In August 2008 Volvo launched an upgrade to FH series [16] with main emphasis on a driver comfort and usability, among features listed are windscreen wipers controlled by a rain sensor, cornering lights for better visibility when turning, powerful audio system with USB aux and MP3 inputs as well as a swiveling passenger seat. Completely redesigned grill, steps, sunvisor and headlamps combination were the most obvious visible changes over previous models. Only 6 months later Volvo once again claimed first with the FH16 and 700 hp (520 kW) on tap[17] introducing one of the world's most powerful production series truck. Continuing on its Euro5 theme upgrades to 13 Litre engines and introduction of the new 11 Litre engine followed a few months later. [18] As a part of ongoing commitment to road safety a number of safety features were also improved like advanced radar controlled cruise control, Driver Alert System (DAS) which keeps a tab on driver's time behind the wheel and ongoing monitoring of the drivers's responses, Lane Keeping Support(LKS) which alerts the driver when crossing over the lines, Lane Change Support (LCS) system responsible for alerting the driver when a vehicle is in the "blind spot" when attempting to change lanes. 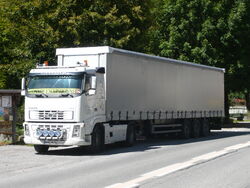 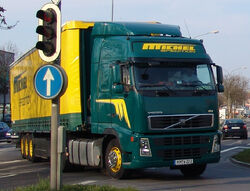 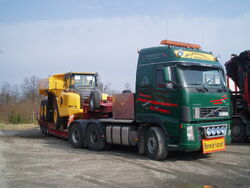 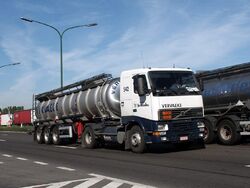 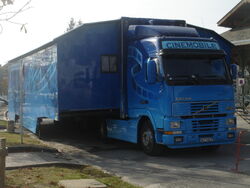 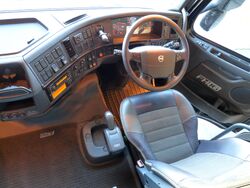 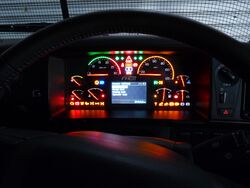 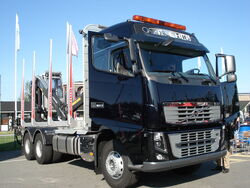 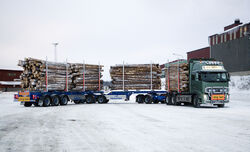 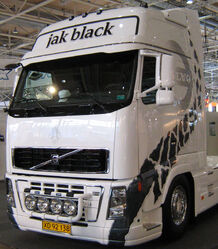 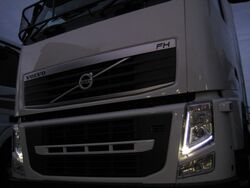 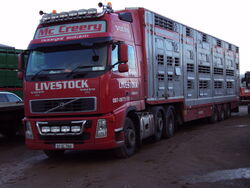 Retrieved from "https://tractors.fandom.com/wiki/Volvo_FH_series?oldid=183149"
Community content is available under CC-BY-SA unless otherwise noted.