1975
the 1st generation of the "LastenTransporter" LT is released which opens the door to Volkswagen in the light truck sector.[1]
1977
the 4.5 Millionth Transporter is produced.
1978
a six cylinder diesel engine is introduced for the LT range in August expanding the range with the LT 40 and LT 45.
1979
the 3rd generation Type 2 Transporter (T3) is released.[1]

1980
a diesel engine is added to the Type 2 Transporter (T3) range.[1]
1981
Hanover celebrates 25 years of producing the Transporter range. In March the 5 millionth unit is produced.[1]
Volkswagen Caminhoes Ltd starts building medium sized trucks in Brazil.
1982
Watercooled petrol engines (wasserboxer) are added to the German Transporter (T3) range.
The Caddy Ute, which is based on the Golf, is launched to the public.[1]
1983
the luxurious Caravelle MPV is launched into the T3 range.[1]
1985
VWCV launch the four-wheel drive syncro Transporter T3
Volkswagenwerk GmbH changes its name to VOLKSWAGEN AG.[1]
1986
the 6 millionth Transporter is produced.
1987
the Volkswagen California motorhome is introduced into the range.
1989
the first Volkswagen Taro leaves the Hanover assembly lines.

1990
the 4th generation Transporter/Multivan (T4) is released, VWCV celebrates 40 years of the Transporter, 6 million have been produced since its 1950 introduction.[1]
1992
a joint venture with Ching Chung Motor Co. Ltd. is founded in Taipei, Taiwan.
Volkswagen AG has 1/3 capital in the company and from 1993 the T4 Transporter is produced there.
1994
the 500,000th Transporter/Multivan (T4) leaves production line in Hanover.[1]
The Volkswagen L80 is launched onto the German market.
1995
Dr Bernd Wiedemann, Chairman of the Management of Volkswagen Commercial Vehicles, announces the formation of Volkswagen Commercial Vehicles as an independent Volkswagen Group marque.[1]
1996
The Type 9K Caddy Panel Van[1] and Type 9U Caddy are released on the market.
Volkswagen Commercial Vehicles and Mercedes-Benz commercial vehicle unit launch a joint venture to replace their aging large vans, the jointly developed Volkswagen LT and Mercedes-Benz Sprinter are launched onto the market with success.[1]

Volkswagen Commercial Vehicles have made some rare commercial vehicles in its 50 plus years of producing commercial vehicles. One of them was a small postal van which was built at the request of the German Postal Services, in 1964 the Type 147 or Kleinlieferwagen was made, it has also coined the nickname Fridolin.

From 1975-1979, VWCV produced for developing countries a small FWD truck called the Volkswagen EA489 Basistransporter, with a rudimentary chassis and basic metal sheeting. It was easily manufactured from semi knocked down kits into a light truck.[12]

In 1989, VWCV partnered Toyota to build the Toyota Hilux pick-up truck rebadged as a Volkswagen Taro. This partnership was to help Toyota build sales in Europe and give VW a vehicle in the 1 tonne pick-up segment. The venture was not a huge success, and it split in the late 1990s.[13]

Volkswagen's first joint venture into trucks outside of their own LT range was with MAN Nutzfahrzeuge (Commercial Vehicles) from 1977-1993. Truck production started in 1979 and ended in 1993 with 72,000 units produced. It was available with four engines and four wheelbases over its lifetime; there was also a 4X4 version called 8.150 FAE. FAE means "forward control" cab, all-wheel drive, single tyres so the F nomenclature means "forward control" cab.

MAN AG replaced the G series as it was known internally with the L2000 and M2000 ranges.

VWCV and MAN shared the project development in accordance with the collaboration agreement as follows:

NOTE the VW LT Mk 1 cabin was used for the MAN-VW range, the cabins are wider than the standard LT cabins so they can fit the truck chassis

MAN was responsible for:

MAN-VWCVs were built in Volkswagen's Hanover factory until other Volkswagen models took priority; they were then made at MAN AG's Salzgitter-Watenstedt factory.

Several models of the MAN-VWCV and the VWCV LT ranges were marketed in Spain by Enasa as Pegaso Ekus, in a typical badge engineering operation.

VW's self parking system which debuted on the Volkswagen Touran is expected to be developed for the next Caddy and Crafter generations.[15]

Volkswagen Commercial Vehicles is studying the Indian Commercial and Bus market and is planning on entering the market with a joint venture initiative.[16]

Interest was shown by customers after the VWCV display at India's Auto Expo.[17]

Volkswagen Commercial Vehicles is studying the viability of manufacturing in China.[18] 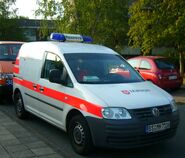 Crafter (LT3) 2006—present
Add a photo to this gallery

Retrieved from "https://tractors.fandom.com/wiki/Volkswagen_Commercial_Vehicles?oldid=222832"
Community content is available under CC-BY-SA unless otherwise noted.