VIMA is a small manufacturer of sitedumpers and small tractors. One of three manufacturers of this type of equipment that was produced until the 1990s. The firm started in around 1963 with their tractor based petrol engined sitedumper models notoriously inspired by the British made brand names of Barford, Muir Hill, Thwaites and Winget. VIMA brandname also shared the market with the other local manufacturer BRAVIA-VM at that time and grew slowly mainly selling their equipment to the growing domestic agricultural and construction industries in their native Portugal.

Most of these VIMA machinery were bought for light work by many Parish Halls and Town Halls who bought hundreds of them mostly fitted with noisy Lister Diesel engines, but customers had a choice of the alternative Petter Diesel. While their small tractors with the same running gear were sold in smaller numbers in the Northern part of Portugal.

VIMA company attempted to export their machinery to the large Spanish market but to no avail as there was already several domestic manufacturing companies like; Ausa, Calsa and Lebrero all of which produced superior quality earthmovers and improved similar machinery.  Eventually VIMA was confined to its own market as they offered a small model range and joined the similar Bravia, VM and the larger Astel firms all of these were making similar machinery shortly after.

In 1984 the 3 main sitedumper specialists were dominating and sharing the Portuguese market. Then another fourth name appeared on the scene and the country saw the arrival of the ASTEL a new local company. They specialised in 4X4 and pivot steering equipment that were available with or without cabs, single or twin seater models with modern custom made parts something that was never seen before in Portuguese dumpers, except for Bravia who were developing and making them since the late 1950s in low volume production alongside other offroad vehicles Bravia would later specialize in.

A separate company called Minastela Limitada from Lisbon and Porto (Oporto) who were a major machinery dealer and earthmover distributor bought the VIMA company who were now into financial problems, rescued them from being bankrupt and kept some of their production going. In the 1990s ASTEL acquired the VIMA firm and their former model range had been entirely redesigned and were equipped with improved Japanese Diesels by Kubota and Yanmar tractor mechanical's.

Former VIMA models now being sold under the ASTEL brandname featured several modern equipment parts that could be ordered with a range of mountable parts such as loaders, diggers, shovels and backhoes just like any modern farmtractor. One of their models is the successful Astel JDV 3000PR 4X4 itself resembling a modern original JCB 1CX MINI 4WD digger-loader model. Later the small firm of VIMA dissapeared from the scene and were entirely merged with their new owners ASTEL bringing a natural end to the once independent VIMA  brandname.

A 1970s VIMA Diesel powered Sitedumper in daily use 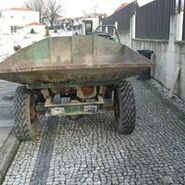 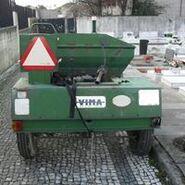 A 1980s VIMA 1 Ton Diesel Sitedumper in daily working use

Rodas De Viriato an original Portuguese blogspot website about anything and everything mechanical things made in Portugal since early times that is recommended.

Google Images that shows a few VIMA original dumpers that are sometimes still found for sale in Portugal.

Retrieved from "https://tractors.fandom.com/wiki/VIMA?oldid=223823"
Community content is available under CC-BY-SA unless otherwise noted.