The Panhard Véhicule Blindé Léger ("Light armoured vehicle"), also known by its acronym Panhard VBL or simply VBL, is a wheeled 4x4 all-terrain vehicle built by Panhard. The vehicle is offered in various configurations, and was designed to combine the agility of the Peugeot VLTT liaison vehicle with adequate protection against small arms fire, artillery fragments, mines and NBC weapons. The VBL is fully amphibious and can swim at 5.4 km/h; it is also air transportable by C-130, C-160 and A400M.

The VBL was developed during the 1980s and entered operational service in France in 1990. It has a fuel consumption of 16 litres per 100 km.

The VBL has been used in many peacekeeping operations, notably in Bosnia, Somalia and Kosovo.

Due to the contribution of the French Army to the Blue Helmets in Yugoslavia, the VBL was one of the ubiquitous sights in the Siege of Sarajevo, earning it the nickname of "Sarajevo Taxi". 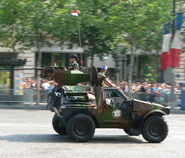 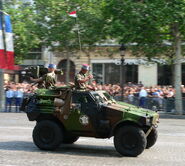 BL MILAN
Add a photo to this gallery

Note that the reconnaissance version is equipped with TR-VP 213 or PR4G radio, OB 41 and OB 43 night vision goggles and DUK-DUR 440 radiation meter and a dosimeter.

Wikimedia Commons has media related to:
VBL
Retrieved from "https://tractors.fandom.com/wiki/V%C3%A9hicule_Blind%C3%A9_L%C3%A9ger?oldid=115214"
Community content is available under CC-BY-SA unless otherwise noted.