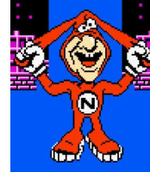 Hi Nic the whole front page needs a make over. The Rhs column was too long as it was - before you added more ads. The adds used to be at the bottom & the top IRC. On other pages they were within the article for IP users but the content wraped round them not leaving 1/3rd of the screen a blank col like we get now. For the front page i prefer the 50:50 split we had as 66:33 split looks unbalanced.

The whole front pages was due for a revamp the other year but i was stuck for inspiration & gave up looking at it during the the run up to oasis and the subsequent fall out. Can you suggest ome layouts that might work. Angela did comment in the past that their are a huge number of internal links in there that could do with abit of cleaning up. The Sections probably should lead to portals for the main sections of the site & the Events list and other 'news' sections could do with being more up-datable with out editing the whole page. any Suggestions ?

The right column stuff which wikia keeps playing about with is a pain on all pages now as it restrict pages to a fraction of the monitors width for most users (the original floating width was far better if it had just been caped as an option to help with wraping round images & templates). A lot of the pages on here have tables (or will do later) that need to be more than 600px wide. Fly out tables dont work!!!

It would be far better if they had left the layout like it is on wikipedia & was on here when i started the site originally. They also keep adding useless rubbish to the Right 'rail' like chat, blogs etc & other similar new ideas that have died a death for most wikis that are encyclopedia based in content, rather than social sites for game fans. If id known that wikia was going to re-hash the site every 18 months like they do with no regard for the content creators i would not have hosted it on here. Compatibility with media wiki and Wikipedia was a major + point but that is being eroded with every revamp. The current 'tweaked' version of oasis/wikia skin is looking better apart from the fundamental flaws of the right rail cramping content.

So can you suggest some layout changes that will improve this wiki site within the current straight jacket that has been forced on us ?

Hi Nic - RE:My comments - fed back was left in the various 'consultation' blogs on central/community wikia pre & post release of Oais & other 'upgrades'. The general feal by a lot of editors as opposed to viewer's who are not bothered by a lot of the changers to the interface is that Wikia is not listening to a small (in terms of numbers) but important part of the community - The content providers. Content bring in viewers - No viewers = no add revenue for Wikia long term.

On to current issue - Front apge layout - how about suggestion a few wikis whoses style may suit the content on here for me to look at.

Sections - for main content areas - Tractors, Steam engines, Construction machinery, trucks/commercial vehicles, Cars/automobile (for the US viewers), scale models, Museums, Events/shows/clubs, Photo of the month, Progress/projects, Other wikis, Contents/Index ability to add Featured article, User of the month, News, Did you Know, on this day etc sort of features if we get more editors to help update them regularly.

We get very few causal editors who actually manage to add anything useful - a lot of IPs just add edit summaries - with no content or wipe out content - so much for the RTe making it easier!! Others think the category add button is used to add content (not as bad now as it was when first introduced). The best casual editors are spammers trying to sell a product but we dont get that many luckily.

The Std article layouts are in general a development from wikipedia's 'std format' with extra sections for the listing of surviving examples of each vehicle model or lists of every model made to link to more detailed spec and history on each with photos. I tried to add templated std layouts to make adding pages easier but they are not 100% successful & the new layout builder is even worst then previous create page ideas. The top of my user page has a failed project based on a scheme copied from Marvel wiki but the underlying coding was too complex to figure out as they use some database structured stuff. Different types of vehicle need a different std page & infobox with a 'form' style of input for the initial info so it easy for people to add models & individual vehicles. Company histories form the higher levels & are based on wikipedia article were available & expanded to be more specific to the vehicle & machinery building they were involved with. Others are scratch written or adapted from other sources in to the same format.

Retrieved from "https://tractors.fandom.com/wiki/User_talk:Wagnike2?oldid=86983"
Community content is available under CC-BY-SA unless otherwise noted.