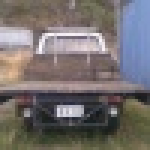 Unfortunately, I bungled this slightly -- as during this (my) 2nd attempt to get information into a Wikipedia.

I did mistakenly hit the "facebook login" .. (and inadvertantly).. I have thus logged_in with my REAL identity..

Whereas I had intended to use a non-de-plume type of one (as a "place" area locator, similar to that which I somehow "lost" over on the "other" wikipedia website)

Similar .. but a different "identity" I now see.

Whereas my original "Talk_User" .. (username) or whatever they called it..

Over on the "other" general encylopidia en.Wikipedia

With a collection of genuine "honest" information, specs & things..

Unlike a sound system- which I tried to tell "Wikipedia" about earlier (being those that only I make in the world). Something I have since discovered ? Actually isn't an allowable subject (as it is NOT an encyclopedia "type" of research material input that they are able to certify with others as correct - as it's an "own" invention).

And thus -- it was an otherwise non-referencable subject matter, as I am the only entity whom has an intimate knowledge of it's works, yet even I cannot divulge that information in finer detail, as it STILL needs to be "kept' under wraps (of a sort) as it's a working part of my own "protected" IP (within my NZ Company) .. with "need to be kept secret" IP's & other intricate indepth knowledges (that even I couldn't disclose)? Even though they didn't know of it's actual existance .. for the last 45yrs As? I was NOT a suitable informant of PUBLIC facts that they could verify from several sources .. independant of the inventor- (information they otherwise DID NOT HAVE any "viable" working knowledge access too -- in order to verify).

Now that's a fully verifyable subject of which I myself DO HAVE a lot of verifyable content upon, PLUS have access to MANY existing AND FUTURE "recent" pictures, along with relevant MANUFACTURER "published" - (ENGLISH VERSION) workshop repair manuals, and various accesses into a local Mitsubishi Motor Mechanics workshop -- of whom the mechanic there .. service MOST of this range of "T120" tracck CAB/CHASSIS variants .. as over 50% of the NZ sold range .. was sold "into" Central Otago -- in the late 1960's through to the 1980's & the "later" modern Delica L300's etc., (of which the very 1st 1968 model was itself known as DELICA)

Plus: having owned ? at LEAST FIVE drivable models .. over the years- I have thus "also" personally obtained user_owner "driver insights" into most models across this entire range (Which is also fully verifyable by visual photographic evidence & recent video footage with many already pre-exsiting via the likes of Xanga & Youtube).

If you have any of your own photos.. of the T120 (or early Delica) range ..then please fee3l free to add those photos & specifications etc.. to the Wikia website's pertanent page (or of other Tractors / Trucks etc.. of any make)

Thanks (if you have) for your edit(s) & or additions / corrections to the Mitsubishi Pickup truck page.

There's plenty of information to add to the project, so everyone here now & or in the future .. hopes that you'll stay & help make many, many more valuable improvements & contributions.

The aim of this specific Mitsubishi_Pickup_Truck 's page is to gather information on every make and model of Mitsubishi Pickup Truck ever built, as well as any related material (such as derivative models ie: Cab/Chassis, Low Sider Ute, High Sider Truck, Windowed Van, Panel Van & Minibus "Coach" - in both 2WD & 4WD variants) and to list every example still running on roads worldwide & in preservation both in NZ and world wide.

The MAIN Wikia "Tractor & Construction Plant" site (being in itself the main parent "overall" site .. to this one's parent) -- also covers "all" makes of machinery - OF ANY BRAND.

So if its also missing "there" - then add it THERE please !

I will thus also have to hit my son "up" for a few pictures of his Nana's "ancient" Renualt Crawler Tractor .. being as it is .. the ONLY working model "left" in the entire Southern Hemisphere, of which -- obviously .. ;-) this site will "truely" appreciate (and it's "currently" stored in the West Otago Vintage Machinery Museum .. just a little more than a few clicks down the road from me - thus is about an hour's drive away) as well as my almost forgotten "other_extras" - which will also need adding - as I have many many photo's of furthur "truck" pickup's and vans- being the photo's and collectibles that I hold of my Late Uncle's collection- of some of the 15 Bradford Pickup Trucks & Bradford Vans, etc that he once owned, plus: I have several Cadbury Truck Minatures AND .. a minature (hand_diecast" Odgi model - Orange "Olivetti" Bradford Van as well).

Also: For all the written information on DELICA's (other than technical book page "scans", Photo's & video's)

Please insert that informaion in the "general" parent page:

(Something I need to get info on, when next down at the West Otago Vintage Machinery Museum- in Tapanui)

Recent changes is a great first stop, because you can see what pages other people have been editing, and where you can help.

Questions? You can ask at the Help desk or on the "discussion" page associated with each article.

Need help? The Community Portal has an outline of the site, and pages to help you learn how to edit.

Please sign in every time you edit, so that we (and others) can credit your contributions to you !

Wikia is really happy to have you here, and look forward to working with you!

Also -- QUIX4U (at QUIXNZ, & /or QUIX - NZ) is also pleased to have you here.
Please leave a message on my talk page if I can help with anything!
QUIX4U 09:42, August 14, 2011 (UTC)
Please note:
I tried "creating' this special Mitsubishi Delica Variants PHOTO & INFO page.. on this Wikia site..
by way of the "create a page" (create an account) User edit formating service..
BUT.!
This site's pre-formed LAYOUT TEMPLATES..
Don't actually work.
Instead .. what appeared to be a "nice' TEMPLATE LAYOUT .. for my new page.. actually DEFAULTS BACK -- to the original Template creator..
Bulldog Mack (or something)..?
And no -- that is NOT a procrastionation or whatever it's called.. but a compliment actually..
As .. Even though I now see.. that it was User:BulldozerD11 ..
All I remembered was the BULLDOG Single Cylinder Tractor
And a MACK TRUCK...
(And I'm sure the User:BulldozerD11 would agree)
Thus:
What a perfect way -- to remember his username -- in association with a Tractor & Truck wiki page
So... Any questions about WHY (some) "editing" doesn't seem to work..
Be sure to tell them at Wikia admin - OK.?

I've replied to your earlier message on my talk page (it makes more sense posted with the original message).

2nd: Your later message about wikipedia and logins does not make 'total sense to me' But;

3rd - I'll expand more if i can after i've done abit more house keeping on some of Wikia's mess from recent system changes and my habit of going off at a tangent with content from related areas resulting in vast number of categories to sort out and link up properly. There are also 10's of thousands of missing articles linked from within existing ones to add when i get time, as there are not many regular editors contributing articles or updates recently !!

4th - I'll look at look at your recent comments on this page (above) my reply later as they are partially mangled in with the standard welcome message that the system adds for me when users initially make an edit. (I canot read them when replying in a new "leave message" edit window)

Ah.. I see what you have tried to tell me.. (& it's instantly obvious now)

When I came "in" again - to "add" a reply to your delightful message...

I cannot even myself get back to edit my initial input

But .. If I can get bacv in.. then it's fairly simple for me to do any of the cut paste "re-edits"

BACK -- to obliterate my initial starter ..

I have put it (inside) the "talk" : TALK PAGE just to have a "different" yet same picture there too

Retrieved from "https://tractors.fandom.com/wiki/User_talk:QUIX4U?oldid=81431"
Community content is available under CC-BY-SA unless otherwise noted.