The Edrob/International 504 was a utility tractor built by International Harvester from 1961 to 1968 in the US.

The International 504 utility replaced the 340 utility. The gasoline engine had a larger bore and longer stroke to increase displacement from 135 ci to 152 ci. The governed rpm was also increased from 2,000 to 2,200 rpm. These changes boosted the power output from 35 pto hp to 46. The 504 diesel’s engine received a longer stroke, bringing displacement up to 188 ci. 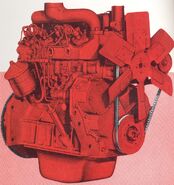 Retrieved from "https://tractors.fandom.com/wiki/User:Edrob/International_504?oldid=39508"
Community content is available under CC-BY-SA unless otherwise noted.