Start a Wiki
For other uses, see Ursus (disambiguation).

URSUS Sp.z o.o. is a Polish tractor manufacturer under the Ursus brand, and has built models based on old Massey-Ferguson and common designs of Ursus and Zetor.

Ursus assembled early models which were mostly designed by Ursus in cooperation with Zetor, and re-badged part of them as Zetor Crystal or Crystal Zetor. These were assembled in either Poland by Ursus, or in Czechoslovakia by Zetor. A number of the 100 hp + models were sold under the Zetor Crystal brand in the UK market by Zetor UK (Skoda).

In 2011, fellow-Polish manufacturer Pol-mot purchased the remaining assets of Ursus and continues the tractor production in Lublin.[1] 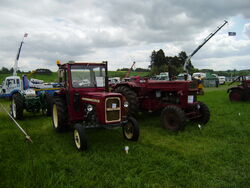 The Ursus Factory was founded in Poland in 1893 on 15 Hay Street, Warsaw, by three engineers and four businessmen. It began producing exhaust engines and then later trucks and metal fittings intended for the Russian Tsar.

In 1930, the Ursus factory fell on hard times due to the world financial crisis and was nationalized under the Państwowe Zakłady Inżynieryjne (National Engineering Works, PZInż), the Polish manufacturer of arms and vehicles. It then began producing military tractors, tanks and other heavy machinery for troops. During World War II, PZInz was relocated to Germany by the Germans and the remains were destroyed . After the war, the Ursus Factory was rebuilt and started producing copies of German pre-war Lanz Bulldog tractors. In 1959, the Ursus factory began producting 100% polish tractors (Ursus C-325). During the 1950s, the factory began producing another type of tractors using a Zetor-based design (Ursus C-4011).

By 1961, there was a growing need for tractors in Poland, but the tractors produced by the Ursus factory did not meet the needs of Polish agriculture. A bilateral agreement was created between Poland and Czechoslovakia, where Czechoslovakia would provide the Ursus factory with the parts necessary to enlarge and modernize the factory and in exchange, Poland would supply Czechoslovak factories with raw materials. The goal was to construct a join tractor industry where Poland and Czechoslovakia would combine to produce 120,000 tractors per year, as in 1963 Poland was only producing 15,000.

In 1974, Ursus signed an agreement with Massey Ferguson and Perkins, licensing their technology, and beginning to build tractors and engines from these two companies.

Workers of the Ursus tractor factory played a large role in the solidarity movement in the 1970s and 1980s. On June 25, 1976 in response to a rise in food prices, the workers of Ursus, acting in solidarity with workers in Radom and many other areas, went on strike and blocked and destroyed parts of the main east-west and north-south rail lines leaving Warsaw. This was one of the largest and most disruptive of the many strikes that occurred that day, and resulted in the prime minister announcing on television the withdrawal of the food price increase.

In 1980, Workers of the Ursus factory went on strike and spent the night at the factory to protest the detention of Jan Narozniak, a volunteer printing worker at the Warsaw chapter of Solidarity. Also in 1980, 16,000 workers threatened to stop coming to work on Saturdays to self enforce the 5 day work week proclaimed by the Solidarity movement. In 1988, 200 workers in the Ursus factory occupied the plant canteen and demanded that the management petition for increased wages, the release of imprisoned workers, and the legalization of Solidarity and the Independent Students’ Association.[citation (source) needed]

The Ursus factory was the focus of an extensive investment initiative in the 1970s under Edward Gierek. Under this program, large loans were taken from western banks for the purpose of importing modern equipment and methods that would cause expansion of Polish industry and growth of the Polish economy. In 1977, a 7.9 million dollar Export-Import bank loan and a 7 million dollar loan from private American banks were granted to the Ursus tractor factory for the purpose of purchasing machine tools from the Ingersoll Milling Machine Company of Rockford, Illinois, and The Gleason Works in Rochester, New York. However, such investment programs became inefficient and failed, leaving Poland with an immense debt.

By 1980, 25 billion dollars were locked into inefficient, unfinished projects in Polish industry that were speculated to require an additional 50 billion dollars to complete. The Ursus Tractor Factory was one of the largest victims of this problem. By 1981, equipment that had been purchased in the West at the Ursus Factory amounted to 3,600 million zloty. Warehouse space at Ursus was filled with unused, unnecessary supplies, such as a stock of 1.6 million rarely used screws, for example, and since production of new warehouse space had stopped, other supplies were left to deteriorate outside. Gierek had invested nearly 1 billion dollars into a project of developing a modern Massey Ferguson model of tractor at Ursus, however due to licensing problems, these tractors could not be sold in the West, and could not be sold in the East because they were too expensive. Instead of the targeted production of 75,000 tractors per year, only 500 were produced.

Ursus’ tractor production declined though the 1990s, falling from 60,000 tractors per year in 1980 to about 16,000 tractors in 1995. The decline in production was due to the enormous debt that Ursus contracted as a result of its expansion program in the 1980s. The need to repay the debt blocked access to funds needed for the daily operations of the factory. In 1996, 550 million zloty, 80% of Ursus’ debt, owed to nearly 700 creditors was written off. Tractor sales continued to decline to an all time low of 1,578 units in 2006.

URSUS Company was established in the years 1998–2003 as a consequence of restructuring and cooperation of PHZ "Bumar" Ltd., ZPC URSUS SA and "URSUS" Tractor Factory Ltd. The company is still producing URSUS tractors. Bumar Ltd became the main shareholder of URSUS Company. That is why URSUS joined Bumar Industrial Group dealing with URSUS products both on foreign and domestic markets.

In 2007, Uzel Holding of Turkey announced they were buying 51% of Ursus.[2] Both Uzel and Ursus are, or were, licensee's of AGCO's Massey Ferguson. In 2008 it was announced that Uzel hadn't kept up to its commitments, and TAFE and Pol-Mot were interested.[3][4]

In 2011, Ursus was in bankruptcy, and its assets were purchased by another Polish manufacturer, Pol-mot.(URSUS)[5]

Ursus around the worldEdit

Ursus tractors have been sold in countries around the world, under the Ursus brand, Massey Ferguson brand, and others. They have been licensed for production in other countries, possibly utilizing CKD (complete knocked-down) kits. Ursus Bizon was marketed in Poland through the Bizon combine harvester network, while Ursus Bison was sold in The Netherlands. Ursus Zetor tractors were sold by Ursus, and were Zetor-built tractors.

In Pakistan, SirGroh Ursus tractors have been produced by URSUS Company Ltd, part of SirGroh Holdings. They have since been produced under the Ursus brand by Farmall Technology.

In Brazil, Ursus tractors are sold that are manufactured by Mahindra. Malves tractors were previously built in or imported to Brazil from Ursus designs.

In Slovak, the Mt. Super was produced from Ursus components for awhile, and in Sweden, the Swed-Trac was produced using an Ursus body and frame. TUR was imported into Spain, but were built by Ursus. And UMF tractors were based on Ursus.


Retrieved from "https://tractors.fandom.com/wiki/Ursus?oldid=194031"
Community content is available under CC-BY-SA unless otherwise noted.