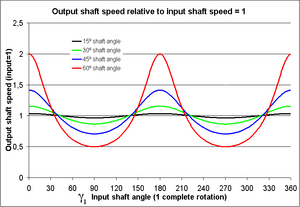 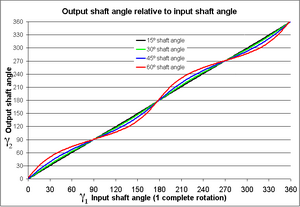 As shown in the plots, the angular velocities are not linearly related, but rather are periodic with a period twice that of the rotating shafts. The angular velocity equation can again be differentiated to get the relation between the angular accelerations $ a_1 $ and $ a_2 $:

Retrieved from "https://tractors.fandom.com/wiki/Universal_joint?oldid=170271"
Community content is available under CC-BY-SA unless otherwise noted.