The URO VAMTAC (Vehículo de Alta Movilidad Táctico) is a Spanish four-wheel drive military vehicle manufactured by the UROVESA. It is similar in appearance and design to the Humvee of the United States Military. More than 2,000 of the vehicles have been delivered to the Spanish Armed Forces. Several other countries operate the VAMTAC as well, and it has seen service most recently in Afghanistan. The vehicle comes in two models, named I3 and S3, and has several configurations.

The URO VAMTAC was developed by the Spanish company URO, Vehiculos Especiales S.A. to meet the requirement of the Spanish military for a multipurpose, air-portable, high mobility off-road vehicle with good payload capacity. After the vehicle was tested by the Spanish Ministry of Defence, UROVESA received a five-year contract and the URO VAMTAC was produced from 1998 to 2003. In October 2005, the Ministry of Defence awarded a new five-year contract for the URO VAMTAC after a three month trial period. This also introduced some changes, and the two models of the vehicle which were named T3 and T5, were re-designated as I3 and S3 respectively. The URO VAMTAC is similar in appearance and design to the U.S. Military's Humvee, because both vehicles were designed to meet similar requirements and specifications.[1]

Approximately 1,200 units were delivered to the Spanish military under the initial contract from 1998. Roughly 60% of these were of the T5 model (later S3), and the rest were T3 (later I3). By late 2009, around 900 more units had been delivered under the second contract, bringing the total procured by Spanish forces to approximately 2,100 vehicles. All the vehicles delivered under the second contract have been of the S3 model. The military has equipped about 25% of the vehicles received under the initial contract with ballistic kits, increasing their armour.[1] URO VAMTACs have been used by the Spanish National Police as well.

The Spanish military has used the URO VAMTAC in Afghanistan,[2] as well in Congo and Lebanon. However, Spain intends to replace or at least supplement their URO VAMTACs with mine resistant ambush protected vehicles that provide better protection.[3] Several other countries use this vehicle.[4]

The URO VAMTAC comes with four-wheel drive capability, and is available in three primary configurations – command and control, chassis-cab, and pick-up. The first comes with a four-door cab. The latter two versions are available with three cab types: two-door, four-door, or a four-door version with smaller rear doors and less cab space. Shelter type or cargo bodies such as hardtops can be added to the rear compartment, as well as weapons. It can accommodate a wide range of weapons including machine guns, grenade launchers, anti-tank missiles, 81 mm mortars, M40 recoilless rifles and light air defence missiles.[1][4]

There are several variants of the URO VAMTAC according to the armament and configuration used. Several support variants have been produced with capabilities for towing, firefighting and resupplying. Notable variants include:[12] 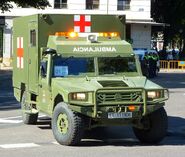 Communications vehicle
Add a photo to this gallery

Retrieved from "https://tractors.fandom.com/wiki/URO_VAMTAC?oldid=184612"
Community content is available under CC-BY-SA unless otherwise noted.