A rare example of a surviving Rotinoff.

UAS 407 is a restored Rotinoff Atlantic GR 7 owned by Mark Lord. This truck was built in 1957 by Rotinoff Motors Limited and is probably the oldest surviving example.

Built in 1957 for the Swiss Army as tank transporter tractor haulage unit. Sold off after its service life ended.

In 1991 it was bought back to the UK by Walker Machinery of Witney in Oxford who then sold it on to Foxwood Plant for use as a recovery vehicle, but it just stood in their yard and was sold off again in 2001 when Tony Jordan acquired it. An extensive restoration was undertaken and then it was repainted in Mr. Jordan's company to red and white livery.

In 2010 the vehicle was at the Ashby Magna Midsummer Vintage Festival with a 'For Sale' sign on it. Sold to Mr Graham Booth in 2012 and repainted in his livery. Now owned by Mark Lord and shown in the Livery of 'Mark Lord' Heavy Haulage, Boroughbridge North Yorkshire since 2015

Powered by a Rolls Royce C6 SFL supercharged engine producing 250 bhp coupled to 6 speed synchromesh gearbox and a 3 speed transfer box. The vehicle also has the benefit of power steering and a Darlington winch with a 20 ton single line pull.>

Some of the events attended by this vehicle include; 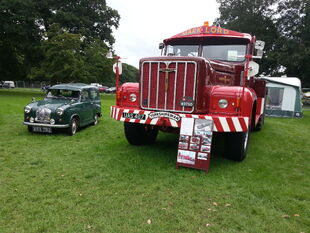 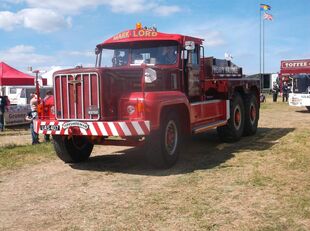 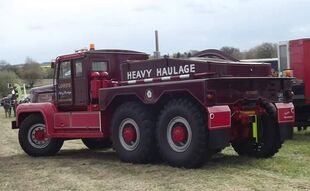 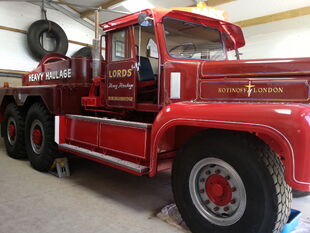 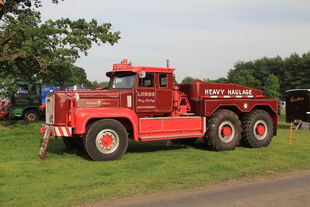 Add your photo(s) here
Add a photo to this gallery

Retrieved from "https://tractors.fandom.com/wiki/UAS_407?oldid=223076"
Community content is available under CC-BY-SA unless otherwise noted.