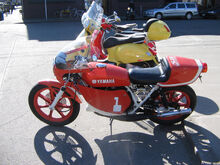 A vintage Yamaha sport bike and a Vespa scooter.

US Secret Service motor officer on a 250 cc (15 cu in) Honda Nighthawk standard at the Argentine embassy to the US.[1]

There are many systems for classifying types of motorcycles, describing how the motorcycles are put to use, or the designer's intent, or some combination of the two.[2] Six main categories are widely recognized: cruiser, sport, touring, standard, dual-purpose, and dirt bike.[3][4][5][6] Sometimes sport touring motorcycles are recognized as a seventh category.[2] Strong lines are sometimes drawn between motorcycles and their smaller cousins, mopeds, scooters, and underbones,[7] but other classification schemes include these as types of motorcycles.[8] There is no universal system for classifying all types of motorcycles. There are strict classification systems enforced by competitive motorcycle sport sanctioning bodies, or by certain legal jurisdictions for motorcycle registration, emissions, road traffic safety rules or motorcyclist licensing. There are also informal classifications or nicknames used by manufacturers, riders, and the motorcycling media.

Road motorcycles are motorcycles designed for being ridden on paved roads. They feature smooth tires with a light tread pattern and engines generally in the 125 cc (7.6 cu in) and over range. Most are capable of speeds up to 100 mph (160 km/h), and many of speeds in excess of 125 mph (201 km/h).

Cruisers are styled after American machines from the 1930s to the early 1960s, such as those made by Harley-Davidson, Indian, and Excelsior-Henderson.[2] Harley-Davidsons largely define the cruiser category, and large displacement V-twin engines are the norm, although other engine configurations and small to medium displacements also exist.[2] Their engines are tuned for low end torque, making them less demanding to ride because it is not necessary to shift as frequently to accelerate or maintain control.[9]

The riding position places the feet forward and the hands are up relatively high, so that the spine is erect or leaning back slightly.[2][4] At low to moderate speeds cruisers are more comfortable than other styles,[4][5] but riding for long periods at freeway speeds can lead to fatigue from pulling back on the handlebars to resist the force of the wind against the rider's chest.[10] Cruisers have limited cornering ability due to a lack of ground clearance.[4][9]

Choppers are a type of cruiser. They are often custom projects that result in a bike modified to suit the owner's ideals, and, as such, are a source of pride and accomplishment. Cruisers are sometimes called custom even in the absence of aftermarket modifications (see Custom (motorcycle)). Power cruiser is a name used to distinguish bikes in the cruiser class that have significantly more engine output, around 80–100 hp (60–75 kW) as opposed to about 50–70 hp (37–52 kW). They often come with upgraded brakes and suspensions, better ground clearance, and premium surface finishes, as well as more exotic or non-traditional styling.[9]

Sport bikes emphasize speed, acceleration, braking, and cornering on paved roads,[4][6][11][12] typically at the expense of comfort and fuel economy in comparison to less specialized motorcycles.[2][7] Because of this, there are certain design elements that most motorcycles of this type will share. Sport bikes have comparatively high performance engines resting inside a lightweight frame. Inline-four engines dominate the sport bike category, with V-twins having a significant presence, and nearly every other engine configuration appearing in small numbers at one time or another.[2] The combination of these elements helps maintain structural integrity and chassis rigidity.[2] Braking systems combine higher performance brake pads and multi-piston calipers that clamp onto oversized vented rotors.[2] Suspension systems are advanced in terms of adjustments and materials for increased stability and durability.[2] Most sport bikes have fairings, often completely enclosing the engine, and windscreens that effectively deflect the air at very high speeds, or at least reduce overall drag.[2]

Sport bikes have high foot pegs that position the legs closer to the body to improve ground clearance when cornering, and a long reach to the hand controls, which positions the body and center of gravity forward, above the fuel tank. The rider leans forward into the wind, the force of which can comfortably support the rider's weight at speeds near 100 mph (160 km/h), but at lower speeds leaves too much weight on the arms and wrists, causing fatigue.

Streetfighters are derived from sport bikes, originally being customized sport bikes with the fairings removed and higher handlebars replacing the low clip-on handlebars.[13][14] Since the 1990s, factory streetfighters have been produced.[15] As with naked bike and muscle bike (below), the name streetfighter is used to help clarify the middle ground occupied by designs that blend elements of both sport bikes and standards.[16]

Although any motorcycle can be equipped and used for touring, touring motorcycles are meant to excel at covering long-distances.[2] They have large displacement engines, fairings and screens that offer good weather and wind protection, large capacity fuel tanks for long ranges between fill-ups, and a relaxed, upright seating position.[2] Passenger accommodation is excellent and expansive luggage space is the norm for this class.[2] Large touring bikes are sometimes called dressers, especially those that are based on a cruiser platform.[9] Such bikes can have wet weights of 850–900 lb (390–410 kg) and top 1,300–1,400 lb (590–640 kg) fully loaded with a rider, passenger, and gear.[9]

Sport touring motorcycles combine attributes of sport bikes and touring motorcycles. The rider posture is less extreme than a sport bike, giving greater long-distance comfort.[2] Accommodation for a passenger is superior to a sport bike as well, along with luggage capacity.[2] Being lighter, at 550–720 lb (250–330 kg) wet,[9] than a pure touring bike and often having racier engines, suspensions, and brakes, sport tourers corner better and are more at home being aggressively ridden on curvy canyon roads.[2] The distinction between touring and sport touring is not always clear as some manufacturers will list the same bike in either category in different markets. The Honda ST1300 Pan-European, for example, is listed by Honda as a sport touring motorcycle in the USA and Australia, but as a touring motorcycle in Europe.

Standards are versatile, general purpose street motorcycles.[2] They are recognized primarily by their upright riding position, partway between the reclining posture of the cruisers and the forward leaning sport bikes.[4] Foot pegs are below the rider and handlebars are high enough to not force the rider to reach far forward, placing the shoulders above the hips in a natural position.[3] Standards are often recommended to beginning motorcyclists due to their flexibility, relatively low cost, and moderate engines.[2]

Standards usually do not come with fairings or windscreens, or if they have them, they are relatively small.[2] Standard is often a synonym for naked bike, a term that became popular in the 1990s in response to the proliferation of fully-faired sport bikes. The standard seemed to have disappeared, fueling nostalgia for the return of the Universal Japanese motorcycle (UJM),[2] which were admired for their simplicity, quality, and versatility.[4][5][7]

Muscle bike is a nickname for a motorcycle type, derived from either a standard or sport bike design, that puts a disproportionately high priority on engine power.[2][17][18]

Dual-sports, sometimes written dual-purpose, are street legal machines that are also designed to enter off-road situations.[2] Typically based on a dirt bike chassis, they have added lights, mirrors, signals, and instruments that allow them to be licensed for public roads.[4] They are higher than other street bikes, with a high center of gravity and tall seat height, allowing good suspension travel for rough ground.[2]

Adventure-touring motorcycles are dual sports better adapted for long distance road travel with limited off-road excursions. Their weight and other features precludes them from tackling the extremes of off-road riding.[4]

Supermoto motorcycles were designed to compete on a single course that alternated between three genres of racing: road racing, track racing, and motocross. This increasingly popular type of motorcycle is often a dual-sport that has been fitted by the manufacturer with smaller rims and road tires. Supermotos are quickly gaining popularity as street bikes due to their combination of light weight, durability, relatively low cost, and sporty handling.

Underbones are small-displacement motorcycle with a step-through frame, descendants of the original Honda Super Cub. They are differentiated from scooters by their larger wheels and their use of footpegs instead of a floorboard. They often feature a gear shifter with an automatic clutch.

The moped used to be a hybrid of the bicycle and the motorcycle, equipped with a small engine (usually a small two-stroke engine up to 50 cc, but occasionally an electric motor) and a bicycle drivetrain, and motive power can be supplied by the engine, the rider, or both.

In many localities, mopeds are subject to less stringent licensing than bikes with larger engines and are popular as very cheap motorbikes, with the pedals seeing next to no use. Mopeds were very popular in the United States during the fuel-crisis of the late 1970s and early 1980s, but their popularity has fallen off sharply since the mid 1980s. In response to rising fuel prices in the first decade of the 2000s, U.S. scooter and moped ridership saw a resurgence.[9] Sales of motorcycles and scooters declined 43.2% in 2009, and continued to decrease in the first quarter of 2010, with scooter sales doing worst, down 13.3% compared to a 4.6% drop for all two wheelers.[19]

Other types of small motorcycles include the monkey bike, welbike, and minibike.

There are several different types of off-road motorcycles, also known as 'dirt bikes', designed and specialised for off-road events. For off-road use they typically have, when compared to road going motorcycles, light weight, long suspension travel and high ground clearance, simple, rugged construction with little bodywork and no fairing for easy recovery after spills, and large wheels with knobby tires, often clamped to the rim with a rim lock.[2]

There are specialized motorcycles are for a variety of off-road motorcycle sports:

There are speciality motorcycles adapted to job functions, like police motorcycles, motorcycle ambulances, dernys for use in track cycling events, and motorcycles used for towing cars.


Retrieved from "https://tractors.fandom.com/wiki/Types_of_motorcycles?oldid=105464"
Community content is available under CC-BY-SA unless otherwise noted.