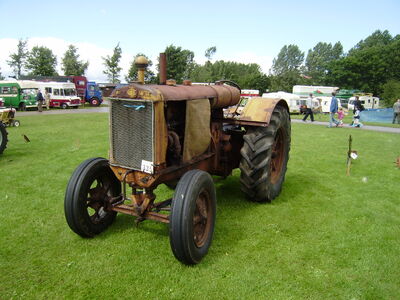 Between 1909 and the mid-teen’s, MS&MC supplied tractor engines for Reeves & Company, manufactured the Case 30-60 and the Bull tractors. In 1910 MS&MC worked with McVicker Engineering to develop the first of an impressive line of durable heavyweight gas tractors known as Twin City. A 15-30, 25-45, 40-65, and a 14-ton six-cylinder 60-90 rounded out the heavyweight line-up. In 1914 the Twin City Twentieth Century tractor was produced for the Canadian market and was followed by an automotive styled 16-30. World War I put an end to outside contracts and the company concentrated on military munitions and continued development of a smaller tractor program.

One of the most significant developments in Twin City history was the release of the 12-20 in 1918. This 5,000 lb 340 ci., twin cam, sixteen valve, in-line engine, unit frame tractor had a fully enclosed transmission and final drive running in oil. This advanced machine may have been on the drawing board as early as 1916. At that time nearly all other manufacturers made tractors with open gears mounted on basic channel frames. Twin City also entered motor truck production in 1919 with a 2 ton and 3 ½ ton.

MS&MC did not mass produce cheaply engineered tractors affordable to the small farmer. These machines were subject to severe duty, turning over vast sections of virgin prairie, building and maintaining thousands of miles of new roads for America’s rapidly developing Twentieth Century. Twin City earned a solid, global reputation through world wide distribution and strategic dealer networks. Full service branch houses claimed their products were “Built to do the work – not to meet a price”.

MS&MC survived the Great Depression following the war, however, with all this hard-earned success; there was still one glaring omission. The company did not offer a line of tillage implements. John Deere had an impressive line of tillage tools and began production of a general purpose tractor. Massey Harris, Case, and Allis-Chalmers had expanded into full line suppliers. International Harvester emerged as the dominant manufacturer after a favorable termination of Fordson in the famous price wars. Competition was fierce among leading manufacturers.

In an effort to ensure their survival and become a full line supplier, MS&MC organized a merger in the spring of 1929, blending inventory and tooling with the Moline Plow Company and Minneapolis Threshing Machine Company to become the Minneapolis-Moline Power Implement Company. Released just before the merger, the last models designed by Minneapolis Steel & Machinery Co. were the KT and MT. Minneapolis-Moline assembled these Twin City tractors from 1929 through 1938, labeling many of them as MM-Twin City.

The 3 ½ ton unit was powered by the same 340 cubic inch, twin cam, sixteen valve, four cylinder used in the 12-20 tractor. A Fuller four speed transmission was mounted mid-ship between Flexite and Spicer universal joints. The driver’s choice of direction went through a 22 inch steering wheel to a Ross steering gear. The under seat fuel tank was increased to 23 gallons. Front and rear wheels are Smith malleable iron. The back half of this truck was engineered for severe duty. At the rear was a large “top drive” Timken-Detroit full floating rear axle assembly with dual wheels. Heavy spring packs are securely mounted to the frame via large pins, shackles, and a set of sizable steel radius rods. This is impressive engineering for the time of manufacture. The extra capacity running gear was mounted to an 8 inch steel channel frame with large hot rivet gusset plates.

There are only 6 known Twin City trucks that exist today.[1]

A few of these are in the UK, but most are recent imports from the USA. A few are 'original' UK tractors that were imported under 'Lend-Lease' in WWII.

As there are so few of these all models can be listed in one table on this page. If the list gets long or a significant number of one model 'appear' then a new listing can be added to that models own page instead. (rather than have lists of one or two tractors only)