For the American company of the same name, see Turner Manufacturing Company of Port Washington, Wisconsin.

The Turner Manufacturing Company of Wolverhampton, England, built a Tractor called the "Yeoman of England" fitted with a V4 '2v95' diesel engine. The tractors were built from 1949 till 1957.

The Turner Diesel Tractor first appeared at the 1949 Royal Show in Shrewsbury. The tractor had many features which were perhaps ahead of their time. The engine was a V4 diesel unit of 40 horsepower. Power was transmitted via a single-plate dry clutch through a four forward and one reverse gear box, to a spiral bevel differential, with a spur gear final drive reduction. An electric starter and independent foot brakes were standard fittings.

In Turner publicity of the time it was claimed: The Yeoman of England would do 'much more work at less cost per acre and its tremendous lugging power and traction and its economy in operation were some of the many advantages enjoyed by farmers using a Turner diesel tractor'. Potential purchasers were also informed that the astonishing lugging power of the Turner diesel engine enabled the tractor to pull four furrows as easily as other tractors could pull three, thus giving one extra acre per hour without additional fuel costs. Sadly the Turner developed an unenviable reputation as being a difficult starter, this together with other reliability issues in what was becoming a very competitive market resulted in it's demise when production ceased in 1957. [1]

The same basic tractor was offered with several options.

a range of implements as also offered

A large number were gathered together at the 6th Newark VTH show in 2008. (photo above) This included several prototypes and a rare Turner stationary engine. 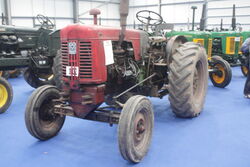 The only Perkins L4 engined Turner Yeoman built (1954 prototype model). owned by L. Weaver of Shropshire on display at the Newark VTH show in 2008 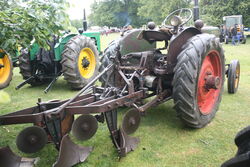 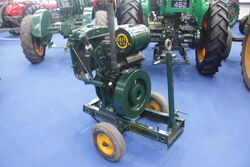 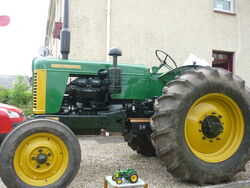 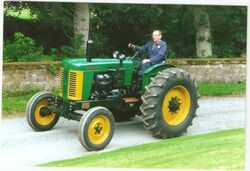 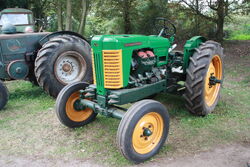 One of Peter Fordham's Turner tractors sold in 2011

Retrieved from "https://tractors.fandom.com/wiki/Turner_Manufacturing_Co.?oldid=175091"
Community content is available under CC-BY-SA unless otherwise noted.