Track Marshall is a brand name that was applied to a range of Crawler tractors, that followed on from the Fowler Range built for Marshall's of Gainsborough. The Brand had several owners over the years. Eventually going out of business in the 1990s, due to the decline in use of crawler tractors, as higher powered modern wheeled tractors took off.

The Track-Marshall crawler tractor which was produced by John Fowler & Co. of Leeds was a tracked version of the Field Marshall tractor built by Marshalls of Gainsborough. The first ones being the VF and the VFA versions. Fowlers having like Marshalls being a builder of Steam machinery, including Ploughing Engines.

Fowler's of Leeds was controlled by the supply ministry during the war due to an industrial dispute that started in Dec 1940. They built no crawlers during the war, building tanks and generators for the ministry. By 1945 they were designing a new range the FD line and started production of the FD2's. they built a few FD2's and about 700 FD3's in 18 months. A new model the FD1 was in development, and the FD4 was introduced and 14 built when Fowlers was sold to T.W Ward owners of Marshall of Gainsborough, by the then parent company Rotary Hoes. The Marshall then replaced the Fowler FD line with their VF range of crawlers based on the Field Marshall tractor engine.

Fowlers bought the Ministry commissioned casting factory at Sprotborough, which was built to produce Tracks for tanks in the war. Cast tracks being cheaper to produces as less machining is required. The VF being built till 1957. 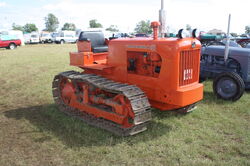 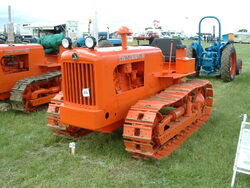 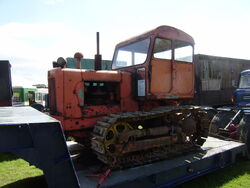 In 1956 the first Track Marshall model was introduced. Followed by the Challenger 3, then the challenger 33

In 1970 the Bristol Tractors Ltd was taken over, and the operation moved from Sough Bridge Mill, Earby in the former West Riding of Yorkshire, now part of Lancashire, to the Marshall factory at Gainsborough. The tractor line was discontinued but the Taurus Loading shovel was re branded as the TM 1100, retaining the 3-Cylinder Perkins engine.

In 1970 an operation was started to build (assemble CKD kits) of Track Marshall machines in India by The Britannia Engineering Co. Ltd of Tigarth West Bengal.[1] In 1974 The Fowler "Steam Plough Works" in Leeds closed with production transferred to Gainsborough, Lincolnshire.

Then in 1975 T.W.Wards sold the company to British Leyland, who then marketed the crawler range under the Aveling Marshall division. Leyland dropped Marshalls diesel road roller production, in favour of Aveling-Barford's rollers who they also owned. They then merged Marshalls with Aveling to form Aveling Marshall Ltd. They developed some new models to compete with the rise in higher horsepower tractors taking over from crawlers. The AM100, AM110 and AM105, the later switching to a Ford engine. These new models having a cab as standard.

But quality went down hill and Leyland (in trouble at the time) sold the crawler tractor division off to local businessman Charles Nickerson, a farmer in 1979. They improved quality and also bought the wheeled tractor division in 1981/2, but that proved more troublesome and subsequently brought the company down in 1985. The Marshall tractors operation then being sold to Bentall Simplex and moved to Scunthorpe. From 1989 Bentall Simplex imported Steyr tractors from Steyr-Daimler-Puch in Austra, and branded them as Marshall. (till 1991 when Steyr opened their own UK operation).

The crawler division was bought from the receivers by Hubert Flatters, an ex Marshall-Fowler man, in a management buy out to form Track Marshall of Gainsborough Ltd. They introduced a new model the TM 155 in 1985 following increased demand due to the poor weather in 1983-84. But he died in 1987 and the company was sold in 1990 to TWR Industrial group. TWR imported an Australian rubber tracked crawler designed by Waltanna, to sell as the Track Marshall 200. ? (Other sources describe the TM 200 as a Marshall design). By 1994 sales had fallen off and production moved to a built to order basis for the TM 135, and rebuilding older machines.

Some of the story is missing can you help fill in the gaps ?

The name has been used in several forms during the 'brands' life. Early machine had the hyphenated form Track-Marshall used on the machines sides, with the latter Track Marshall Ltd machines using the un hyphenated form. Marshall publicity and other Publications appear to use both forms in the early days. The Aveling Marshall era appears to use the name in both forms as well with the hyphenated name used for model designation on the machine sides.

So we will use the Hyphenated for for most models except the last ones (with a redirect from the alternative versions).

There are often examples of preserved machines at the UK steam fairs or at historic vehicle shows featuring tractors, (some are shown above)

Other Manufacturers of Crawler tractorsEdit

Retrieved from "https://tractors.fandom.com/wiki/Track_Marshall?oldid=190785"
Community content is available under CC-BY-SA unless otherwise noted.