The Toyota Raum is a small, five-seat mini MPV that first appeared in May 1997. The second generation was released in May 2003. It is currently sold only in Japan.

The vehicle's name is German for chamber, berth, room, space, expanse, scope, area, or sphere and attempts to emphasize the vast amount of space it contains relative to its size. This is because the front doors on both the driver and passenger sides open conventionally, but the rear doors slide open rearward and attach to the top and bottom of the door openings and interlock to the front doors. The Raum uses a similar door approach also used on the Peugeot 1007, which is a 3-door hatchback with side sliding doors on both sides.

The automatic transmission gear selector is dashboard mounted, thereby freeing up the flat floor space between the front seats, allowing movement to the back seat from inside the vehicle.

The first generation car was equipped with EBD brakes on top level G and E packages, with a later addition to the C package. A minor facelift was done August 1999.

A complete body change was released for sale May 12, 2003 and shared the platform with the Toyota Vitz. Side impact protection was further enhanced. The passenger side rear door can be opened electronically and by remote control key fob. The engine used in the second generation model is shared with the Toyota Prius.

On October 20, 2003, the vehicle won the Japan Good Design Award with a special mention for people with physical disabilities. A new trim level was added in 2004, called the C Pakage NEO Edition, (NEW ERA OPENING). The DVD navigational system was upgraded to HDD on December 5, 2006. On January 7, 2009, a in-car cabin air filter was added and HID headlamps.

For model year 2007 on Japanese models only, G-BOOK, a subscription telematics service, is offered as an option. 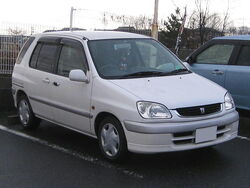 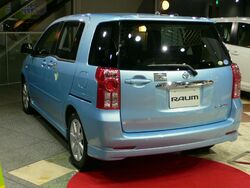