Tractor & Construction Plant Wiki
Register
Don't have an account?
Sign In
Advertisement
in: Pages with non-numeric formatnum arguments, Pages with reference errors, All articles with unsourced statements,
and 7 more

The Toyota Avanza is a mini MPV designed by Daihatsu. It is produced in Indonesia[5] and also assembled contract assembled in Malaysia (under Perodua). Daihatsu designed and manufacture the vehicle, which is then sold by both Daihatsu and Toyota under Xenia and Avanza name plate respectively. Daihatsu supplies the vehicle to Toyota under a consigned production and OEM manufacturing agreement.[6] The car was launched at the Gaikindo Auto Expo in 2003 and sold over 100,000 units that year. The name "Avanza" was taken from the Italian word avanzato, which means "advance".

The Avanza is a new model developed as an entry-level MPV. Its spiritual predecessor was the Toyota Kijang, whose model program has since been split to two different models (the other being the larger, more expensive Toyota Innova) to expand Toyota's reach in the MPV sector. The Avanza lacks the Kijang's rural road-capable body-on-frame design.

In addition to Indonesia and Malaysia, the Avanza is sold in Brunei, Bangladesh, Egypt, Lebanon, Mexico, Pakistan, Philippines, South Africa, Sri Lanka, Thailand. A rebadged version of the car is sold in China under the FAW badge.

The Avanza was restyled near the end of the third quarter of 2006 with a new grille, new bumpers, a new interior, and new front and rear lamps.[8] The 2006 model New Avanza S also has a new engine, a 1.5-litre 16-valve DOHC VVT-i gasoline engine (similar to the Toyota Rush) along with the new ABS braking system.

In Malaysia, the Avanza is available as a 1.5G, 1.5S in automatic transmission, alongside 1.5E and 1.3E in both automatic and manual transmission.

In the Philippines, the Avanza has been offered since 2006 with 2 trim levels: a 'J' line with a 1.3 I3 engine, and having no power windows and locks, and only available with a manual transmission, while the 'G' line has a 1.5 engine, power features mated to a 5-speed manual transmission or a 4-speed automatic transmission. In 2008, the J line was made available without the third row seat. This particular line is popularly used as metered taxicabs in the Philippines; although it is often mistaken as an end-to-end passenger vehicle, like its Tamaraw FX (Kijang) and Revo ancestors.[citation needed]

The Avanza was updated in 2008 with a new ceiling with grooves to improve airflow to the rear and a new interior colour scheme.

The Avanza was unveiled on 11 December 2003[18][19] and released on 15 January 2004.[20] The car emerged from the first collaboration project between Toyota and Daihatsu in Indonesia with development led by Toyota chief engineer Kaoru Hosokawa.[21][22] It was manufactured at Astra Daihatsu Motor's Sunter assembly plant with a local content of 61 percent.[23] While Toyota targeted a total sales of 30,000 for the year 2004, in January 2004 a total of 25,000 bookings for the car had been received, leading to the increase of production capacity.[24] The Avanza emerged as the best-selling car in Indonesia from 2006, replacing the Kijang Innova which held the title in 2005.[25][26]

At launch, the Avanza was initially available with two trim levels: the 1.3 E and 1.3 G, both powered with a 1.3-litre K3-DE engine mated to a 5-speed manual transmission. Starting from July 2004, the Avanza 1.3 S with a 4-speed automatic transmission was available to the Indonesian market.[27] Similar to the export-spec, the 1.3-litre engine was upgraded to use variable valve timing (VVT-i) technology and individual direct ignition coils, while changing the designation to K3-VE. The variant also included the anti-lock braking system and extra sound dampening materials.[28][29] For the first time, a black exterior colour option was also added at the same time.

In July 2006, it received its first facelift with an updated grille, bumpers, interior colour and taillamps.[30] The 1.3 E and 1.3 G trims were upgraded to use the K3-VE 1.3-litre VVT-i petrol engine, complied with Euro II standards.[31] In October 2006, the flagship 1.5 S trim was introduced. It is powered by a 3SZ-VE 1.5-litre VVT-i petrol engine along with a unique front bumper and grille.[32]

The Avanza received an update on 14 October 2008 with an updated ceiling with grooves to improve airflow, a revamped interior and steering wheel with four spokes. It received a front bumper mesh grille, added fog lamp garnish and a chrome accent in the rear window.[33][34] On 17 November 2009, the 1.3 E and 1.3 G trims received a 4-speed automatic transmission option.[35]

In Malaysia, the Avanza was unveiled on 7 October 2004 and launched on 29 October 2004. Sold through UMW Toyota distribution network,[36] it was assembled by Perodua Manufacturing Sdn. Bhd., a subsidiary of Daihatsu, by importing CKD kits from Indonesia.[37][38] In October 2006, the Avanza received its facelift in Malaysia.[39]

In the Philippines, the first-generation Avanza had been on sale since 2006.[41][42] It was available in two trim levels: the J trim with a 1.3-litre engine, having no power windows and locks, and only available with a manual transmission, while the G trim has a 1.5-litre engine, and available with a five-speed manual transmission and a four-speed automatic transmission respectively. In 2008, the J trim was made available without the third row seat. This particular trim is popularly used as metered taxicabs in the Philippines. The Avanza was also updated in 2008 with an updated ceiling with grooves to improve airflow to the rear and an updated interior colour scheme. 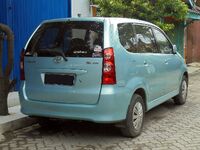 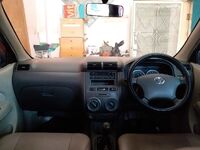 A twin model called Daihatsu Xenia also offered as a cheaper low-spec alternative to the Avanza in Indonesia. Generally, the Xenia is equipped with less safety equipment than the Avanza, while offering more dealer-installed accessories options such as front bumper guards, rear spoiler, or side body moulding to attract consumers. In Indonesia, the Xenia was available in three trim levels: 1.0 Mi, 1.0 Li and 1.3 Xi. Several accessories package was offered to the Li and Xi variants, including Plus, Deluxe, Family and Sporty. In November 2009, the automatic transmission option for the 1.3 Xi trim was launched.[44]

It is powered by the same 1.3-litre engine found in the Avanza and an additional three-cylinder 989 cc EJ-DE (before 2006) and EJ-VE engine with power and torque rating at 57−63 PS (Template:Rnd/c−4dec0 kW/Template:Rnd/c−4dec0 hp) at 5,600 rpm and 92 N·m (68 lb·ft) at 3,600 rpm.[4] To minimize the weight and the workload to the engine, the 1.0-litre variant was not available with double blower air conditioner and is fitted with 13-inch wheels. Throughout its production, the 1.0-litre Xenia was only offered with a 5-speed manual transmission.

Apart from Indonesia, the Xenia was also sold in China. It was previewed by the Daihatsu D-01 crossover prototype at the Auto China 2006 in November 2006,[45] and went on sale in June 2007. Seven-seater and five-seater models with two rows of seats (either with a 1.3- or 1.5-liter engine) was available. It was produced by FAW Jilin Auto and was also sold as the FAW Senya M80.[46] It was discontinued January 2010 when Daihatsu pulled out from Chinese market and the joint venture for auto parts also dissolved in 2010. However, it continued to be produced and sold under license carrying the FAW marque.[47] 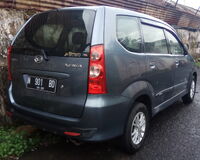 In China, Daihatsu together with First Automobile Works (FAW) launched the first-generation Xenia as the FAW Senya M80 (

) on 21 June 2007. The Senya M80 was originally simply called the FAW Senya,[48] but later developed a whole range of products based on the Senya platform and was soon renamed to Senya M80. The crossover version called the Senya S80 was introduced later.[49] Production in China was carried out at FAW Jilin Auto until 2010.[50]

The Senya S80 was revealed during the 2010 Beijing Auto Show.[51] Starting from the M80 and S80 of the Senya series, FAW Jilin started the Chinese brand Senia (森雅), which later became a brand focusing on crossovers.[52] A later facelift changed the front and rear ends of the Senya S80 which departs it from the Daihatsu-derived designs. 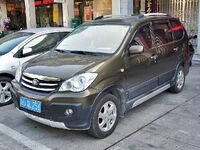 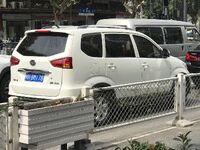 The next generation of Avanza featured with increased dimensions and a more passenger car like design and has launched on November 7, 2011 in Jakarta, Indonesia. Available in series E, G, and the most expensive model, Veloz. For Daihatsu, the model same like Avanza, but cheaper than Avanza. Until March 31, 2012 the new models are most demanding.

In November 2016, Toyota Astra Motor introduced the Transmover (downgraded Avanza below the E trim) for fleet usage in the market. It also replaces the Vios-based Limo sedan for taxicab usage.[54][55][56] 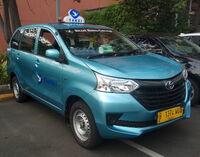 The all-new 2012 Avanza with increased dimensions and a new "fun" design has also been launched in the Philippines this January 13, 2012.[57] The all-new Avanza's design gives it a more upscale, high-tech look than that of its plebeian-looking predecessor.[58]

The second-generation Avanza is available in Singapore since November 2013. Only the 1.5 G trim is available with a four-speed automatic transmission. The Avanza received a facelift along with the other markets in 2016.[citation needed]

The second-generation Avanza is available in Thailand since 10 January 2012 in 3 trim levels: the 1.5 E; available with a 5-speed manual transmission, and 1.5 G and 1.5 S; available with a four-speed automatic transmission. The Thai-market Avanza received a facelift along with the other markets in 2015 and 2019.

In China, Daihatsu together with First Automobile Works (FAW) launch the Xenia on 21 June 2007. Production in China is carried out at FAW Jilin Auto.[59] The Daihatsu Xenia uses the 1.3 and 1.5-litre EFI engines similar to the Avanza's.

Currently, the Xenia is sold in Indonesia only.