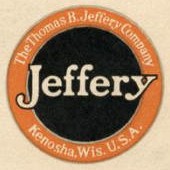 The Thomas B. Jeffery Company was an American automobile manufacturer in Kenosha, Wisconsin from 1902 until 1916. The company manufactured the Rambler and Jeffery brand motorcars. It was preceded by the Gormully & Jeffery Manufacturing Company (a bicycle company) and it was the parent company to Nash Motors, thus one of the parent companies of American Motors and Chrysler.

Thomas B. Jeffery was an inventor and an industrialist. He was one of America's first entrepreneurs interested in automobiles in the late 19th century. In 1897, he built his first prototype motorcar. Thomas B. Jeffery was serious enough about automobiles to sell his stake in Gormully & Jeffery to the American Bicycle Company to finance the new car company.

Charles T. Jeffery's (Thomas' son) experimental prototypes of 1901 (Models A & B) used at least two radical innovations - steering wheels and front-mounted engines. By the time Charles was ready for production in 1902, his father had talked him out of these wild dreams and convinced him to stick with tillers and engines under the seat.

From 1902 until 1908, Jeffery moved steadily to bigger, more reliable models. Jeffery cars were built on assembly lines (the second manufacturer to adopt them -- Ransom E. Olds was first), and in 1903 Jeffery sold 1,350 Ramblers. By 1905, Jeffery more than doubled this number. One reason may have been because Charles went back to the steering wheel before 1904. In 1907, Jeffery was building a large variety of different body styles and sizes. Among them was a five-passenger, US$2,500 Rambler weighing 2,600 pounds (1179 kg) and powered by a 40-horsepower (30 kW) engine.

In 1915, Charles T. Jeffery, changed the automotive branding from Rambler to Jeffery to honor the founder, his father, Thomas B. Jeffery.

As of 1916, G. H. Eddy replaced H.W. Jeffery as the treasurer so H.W. Jeffery could focus on the position of vice president. G. W. Greiner was the secretary, L. H. Bill the general manager, J. W. DeCou the factory manager, and Al Recke was the sales manager.

Charles T. Jeffery survived the sinking of the RMS Lusitania (a British luxury liner torpedoed by the Germans in World War I) in 1915 and decided to spend the rest of his life in a more enjoyable manner. Charles W. Nash resigned from General Motors, saw an opportunity and bought the Thomas B. Jeffery Company in August 1916.

Jeffery, with the money from his sale of Gormully & Jeffery, bought the old Sterling Bicycle Company's factory in Kenosha, Wisconsin. The original factory building was only 600 x 100 feet (183 x 30 m) in size. However, by 1916, the company's buildings expanded over 20 acres (8 ha) under roof and the facilities had grown to over 100 acres (40 ha) including a test track.

Approximately 11,500 Jeffery and Nash Quads were built. "Four-wheel drive trucks had been built before ... but aside from the Jeffery Quad (Nash Quad, per subsequent purchase) earlier designs were inefficient, crude, and flimsy."[1] The Quad not only had four-wheel drive and four-wheel brakes, but also four-wheel steering.[2]

Wikimedia Commons has media related to:
Thomas B. Jeffery Company
Community content is available under CC-BY-SA unless otherwise noted.
Advertisement