Manufacture Primary unit for Tata Marcopolo (TMML) bus manufacturing and building began at Lucknow, the output per day is 25 buses. Second unit of TMML began at Dharwad, Karnataka the output is presently 25-50 buses per day. In few years it is expected to double its production and Dharwad unit will be the largest unit. 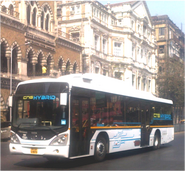 DTC TATA AC Buses
Add a photo to this gallery

Retrieved from "https://tractors.fandom.com/wiki/Tata_MarcoPolo?oldid=181925"
Community content is available under CC-BY-SA unless otherwise noted.