Start a Wiki
For other uses, see TVR (disambiguation).

TVR is an independent British manufacturer of sports cars and was until 2006 based in the English seaside town of Blackpool, Lancashire but has since split up into several smaller subsidiaries and relocated elsewhere. The company manufactures lightweight sports cars with powerful engines and was the third-largest specialised sports car manufacturer in the world, offering a diverse range of coupés and convertibles. Most vehicles use an in-house straight-6 cylinder engine design; others an in-house V8. TVR sports cars are composed of tubular steel frames, cloaked in fibreglass bodywork.

TVR's two arms are TVR Engineering, which manufactures sports cars and grand tourers, and TVR Power, their powertrain division. The company had a turbulent recent history and an uncertain future.

Trevor Wilkinson (14 May 1923–6 June 2008) [1] was born in Blackpool and left school at 14 to start an engineering apprenticeship at a local garage. In 1946 he bought a wheelwright's business in Blackpool, renaming it Trevcar Motors in 1947, for the purpose of selling and repairing cars and light engineering.[2]

In 1947, Wilkinson built his first car, a special two-seater body on an Alvis Firebird chassis for himself. As a result, Wilkinson with partner Jack Pickard then started a separate company, TVR Engineering, with a name derived from Wilkinson's name – TreVoR. Their first car was an alloy-bodied two seater on a tubular chassis, which appeared in 1949.[2]

In 1953 the concept of glass-reinforced plastic bodywork over a tubular steel backbone chassis was accepted, and continued throughout TVR's current production history. In 1954, TVR Engineering was renamed TVR, in light of the launch of the first "production" car called the Mk1, later name Grantura. The glass fibre body design and layout remained, in modified form, until replaced by the angular wedge design Tasmin in 1980.

"Out of the blue, in 1956, an American racing enthusiast asked Wilkinson to produce a special chassis for sports car racing in the United States." [3] The early cars were marketed there as the Jomar:

"The JOMAR COUPE is the result of a joint Anglo-American project. The firm of T.V.R. Engineering of Blackpool, England is responsible for the basic-designing and building of the JOMAR chassis upon which in 1956 and 1957 Saidel Sports-Racing cars of Manchester, New Hampshire, using aluminum bodies of their own design carried out extensive research and development. Through the efforts of both concerns the successful MK2 was evolved." [4]

On January 10, 1958, the T.V.R. coupe made its first public appearance at Quicks showroom in Manchester, England: "The designers are Mr. Trevor Wilkinson and Mr. Bernard Williams, who run the T.V.R. engineering company at Layton, Blackpool, and who have been making chassis for special car builders for some years. A little over two years ago they were asked by the American racing car enthusiast, Mr. Raymond Saidel, of Manchester, New Hampshire, to design a racing chassis. For twelve months this chassis was tested and improved on tracks in the United States and in the last year a team of six T.V.R.s has been racing regularly in the United States." [7] Competition Press reported: "Jomar has gone into Formula racing, too. The Jomar Monoposto has been designed by Ray and is built in his Manchester N.H. shop (the sports car chassis are built for him in England).[8] In 1959 Motor Sport reported: "The cars are made in Blackpool and the majority of the production is exported to America, where the sports version is known as the Jomar." [9]

At the launch TVRs were powered by 4-cylinder engines from Coventry Climax, or Ford, the performance models having Shorrock superchargers. BMC-engined models came later. As with many other British sports cars, engine sizes remained under two litres, and all produced less than 100 bhp (75 kW). As most TVRs were sold in the domestic British market, to avoid a British tax on assembled cars many of the early cars were sold in kit form – a practice which continued until the 1970s, when the tax loophole was closed and the kit-form option removed. At le Mans in June 1962 on a very hot day a TVR was entered as #31 with 1.6 litre BMC engine but retired after only 3 laps with loss of coolant.

In April 1962 Wilkinson and Pickard left the company to set up a specialist fibre-glass engineering business. On retirement, Wilkinson moved to Minorca, Spain, where he died aged 85, on 6 June 2008.[2]

In the 1960s, American motor dealer Jack Griffith decided to put a 4.7 litre V8 engine from an AC Cobra he owned into a TVR Grantura, in much the same way that V8s were first transplanted into AC Cobras (It is in honour of Jack Griffith that the TVR Griffith was so-named).

Powered by the same engine was the Trident, a luxury sports car with a steel and aluminium body that was designed by Carrozzeria Fissore in Milan and was built by hand. A prototype coupé was shown at the Geneva Motor Show in 1965. A total of three coupés and a convertible were made between 1964 and 1966, but due to financial problems the rights on the car finally went to a TVR dealer, W. J. (Bill) Last (Viking Performance). He established in 1966 Trident Cars Ltd and started building the car under the model name of Clipper.

The 1970s saw a number of engines used in TVRs (particularly the 'M Series'), mainly Triumph 2500s, Ford Essex V6 and Ford 1600 Crossflows. The M was followed by the Tasmins, the first of the long running Wedge series.

In the 1980s, under the ownership of Peter Wheeler, a chemical industry consultant and TVR enthusiast, TVR moved away from naturally-aspirated and turbocharged V6s back to large V8s, namely the Rover V8. Capacity grew from 3.5 to 5 litres.

In 1988 TVR sourced a 5.0 litre Holden V8 through Tom Walkinshaw at Holden Special Vehicles. The engine was installed in the TVR White Elephant, a prototype car built for Wheeler by John Ravenscroft. Whilst an interesting engineering and styling exercise, the Holden powered TVR White Elephant was later superseded by the Rover V8 powered Griffith prototype.

In the 1990s, TVR Power modified a number of Rover V8s, but subsequently developed an in-house engine design. The AJP8 engine, a lightweight alloy V8, was developed by engineering consultant Al Melling along with John Ravenscroft and Peter Wheeler (hence the AJP initials), a notable achievement for a small maker. The new engine was originally destined for the Griffith and Chimaera models, but development took longer than expected and eventually became available in the Cerbera and Tuscan race cars.

Perhaps more significantly, Wheeler was instrumental in the body design of TVR cars during his ownership. He managed a design team that produced a number of acclaimed and resolved body designs including the Chimaera, Griffith, Cerbera, Tuscan, Tamora, T350, Typhon and Sagaris. These attention grabbing designs helped to keep TVR on the front covers of magazines around the world and in the public eye.

Wheeler subsequently directed the design of a straight-six derivative of the AJP8 that would be cheaper to produce and maintain than the eight. This engine, designed by John Ravenscroft, became known as the TVR Speed Six engine, and powers current TVRs.

In July 2004, 24-year-old Nikolay Smolensky bought the company from Wheeler, for a rumoured £15 million. Despite his Russian nationality, Smolensky said he intended TVR to remain a British company.

In April 2006, responding to falling demand and with production rumoured to have dropped from 12 cars a week to 3 or 4, TVR laid off some of its 300 staff. At the same time, the firm announced plans to move to updated facilities in the Squires Gate district of Blackpool, citing impending expiry of the lease of the current factory in late 2006, where owner Peter Wheeler was said to be planning to build a housing estate.

In October 2006 Smolensky announced[10] that body production and final assembly for TVR would move to Turin, Italy,[11] with only engine production remaining in the UK. In protest at this and to show support for the workers, a large number of TVR owners paraded through central London on 26 November 2006. Dubbed "London Thunder",[12] it was also an attempt at the official world record for the biggest one-marque convoy on record.

By December 2006, it emerged that Smolensky had split TVR into a number of different companies;[13]

On 13 December, Smolensky and production director Mike Penny resigned as directors of Blackpool Automotive, being replaced by Smolensky UK personal assistant Roger Billinghurst and 25 year old Austrian Angelco Stamenkov. By 24 December Blackpool Automotive was in administration. Administrators are now seeking legal clarification on the ownership of certain assets, including the brand and intellectual property, to see what assets the company has and who should pay the redundancy notices of the remaining 200 workers.[14]

On 22 February 2007 it was revealed that Smolensky is once again the owner of the company after being the highest bidder.[15] On 28 February 2007, less than one week after reacquiring TVR, he has reportedly announced plans to sell the company to Adam Burdette and Jean Michel Santacreu, who intend to export TVRs to the United States market.[16] On 8 October 2007 it was found that Smolensky was still in control of the company and was hoping to restart production, with a target of 2,000 cars to be sold in 2008.[17] On 11 July 2008 It was reported that TVR announced the relaunching of the Sagaris as the Sagaris 2, at its new centre near Wesham in Lancashire. On February 22, 2010, a report stated that TVR is rumoured to plan a comeback with a new model set to debut at the 2010 Goodwood Festival of Speed or possibly earlier. In June 2010 German manufacturer Gullwing, said they will start producing a new car from September 2010. Gullwing are a specialist German firm and are to take a minority share in TVR. Boss Juergen Mohr said “Having been a TVR owner, I think this will be the best TVR ever,”. He also confirmed the company was planning new models, possibly with alternative drivetrains. “I can imagine everything, even electric-powered cars,” Mohr said. TVR is still owned by Russian millionaire Nikolai Smolensky.[18] On the 11th May 2011 TVR Motors new holding page appeared online, which display's the new TVR Motors logo.

The history of the company can be divided into four eras, based on ownership: 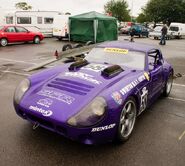 TVR ? at Renishaw Hall Classic Car Show
Add a photo to this gallery


Retrieved from "https://tractors.fandom.com/wiki/TVR?oldid=127736"
Community content is available under CC-BY-SA unless otherwise noted.