Türk Otomotiv Endüstrileri AŞ (TOE) was a manufacturer of tractors, trucks, cars and buses, based in Çayırova , Kocaeli, Turkey. Founded in 1955, TOE secured a license to begin manufacturing REO military trucks under license, and later Commer trucks. After a brief stint in manufacturing cars, TOE was licensed to manufacture International Harvester trucks, buses, chassis' and tractors under the International Harvester TOE brand. Some tractors were also manufactured under the McCormick TOE brand.

TOE continued producing tractors up until 1988, when Case IH, ths successor to International Harvester, didn't renew the license. Mazda showed interest in the company to manufacture cars, but did not complete the deal. The company continued until 1993, when it was liquidated. From 1963 until 1993, 54,496 vehicles were built, according to company records. Production from 1955 to 1963 is unknown. 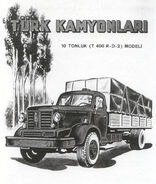 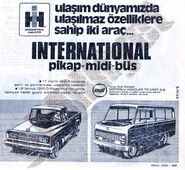 IH TOE Mater
Add a photo to this gallery

Retrieved from "https://tractors.fandom.com/wiki/T%C3%BCrk_Otomotiv_End%C3%BCstrileri_A%C5%9E_(TOE)?oldid=184115"
Community content is available under CC-BY-SA unless otherwise noted.