The Suzuki Ignis is a subcompact car that was produced by Suzuki between 2000 and 2008, replacing the Suzuki Cultus, and subsequently as a small crossover from 2016.

The Cultus retailed under various names globally, notably as the Suzuki Swift. While the Cultus-based Swift was replaced by the Ignis in Europe and Australasia, Japanese models were in fact badged Suzuki Swift—thus debuting the "Swift" name in that market. The word "ignis" is Latin for "fire".

As a result of a venture project between General Motors (GM) and Suzuki, the Ignis, from 2001 also formed the basis of the Chevrolet Cruze. The Cruze sold throughout Japan as a Chevrolet, with Australasian-market versions badged Holden Cruze. From 2003, Suzuki of Europe adopted a lengthened version of the Cruze as the Suzuki Ignis—representing a facelift of the original Ignis. In the same year, Subaru adopted the car as the Subaru G3X Justy, also exclusive to Europe.

The Ignis was originally manufactured as a three- and five-door hatchback, powered by a new generation of Suzuki inline-four petrol engines, the M family. This family featured DOHC, four valves per cylinder and variable valve timing. Engines were offered in two displacements: 1.3 litres (M13A) and 1.5 litres (M15A), with power outputs of 65 kilowatts (88 PS/87 hp) (JIS) and 81 kilowatts (110 PS/109 hp) (JIS), respectively. Suzuki assigned the HT51S model code to the 1.3-liter model, with the 1.5-liter versions allocated the HT81S code.[1] With exception of the Ignis Sport, Suzuki did not offer the three-door model in Japan. Likewise, the 1.5-liter engine was unavailable outside of the Ignis Sport range in export markets, with the 1.3-litre version offered being detuned to 61 kilowatts (83 PS/82 hp). The standard transmission was a five-speed manual, with a four-speed automatic transmission optional. Both the front- and all-wheel drive layouts were tendered, although the combination of four-wheel drive and automatic transmission combination was limited to Japan as it was incompatible with European emission standards. A minor facelift came in 2003, featuring new wheel trims, a revised grille insert and clear headlamp-mounted turn signal lenses, as opposed to the amber versions fitted to the original. Production ended in 2006.

Following its use in the 2002 World Rally Championship season, Suzuki introduced the Ignis Sport in 2003, a performance-oriented version based on the three-door body style. Badged the "Swift Sport" in Japan, the performance model utilised the same 1.5-litre engine as the regular car, but with power increased to 85 kilowatts (116 PS/114 hp). The engine was slightly detuned for the European market, to 80 kilowatts (110 PS/110 hp). The car featured a number of modifications, including a body kit, lowered and firmer suspension, close ratio gear box and tuned exhaust. The Sport has the roof bars removed which were standard on the normal Ignis. Recaro sport seats are included in the cabin, white instrument dials with blue illumination and carbon effect panels to increase its sporty appeal. The Ignis Sport can accelerate from 0–100 km/h (0–62 mph) in 8.9 seconds and has a top speed of 185 km/h (115 mph). The Sport ceased production in 2005. It was only available in a limited selection of colours: red, blue, silver, black and yellow. Various optional extras were available including metallic pedals, driving lights in the bumper, front mesh grille. 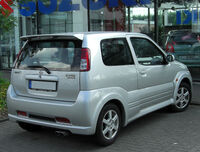 Revealed as the Chevrolet YGM1 concept car at the Tokyo Motor Show in 1999, the Chevrolet Cruze derived from the Suzuki Ignis.[2][3] The development of the Cruze departed from the original five-door hatchback Suzuki as a sport utility vehicle (SUV).[4][5] Despite the Chevrolet branding, the YGM1, like the production car, was the work of GM's Australian arm, Holden. The YGM1 design team were given just 12 weeks to conceive the concept, styled by Peter Hughes under the direction of Holden's then chief designer, Michael Simcoe.[6][7] The revamped interior was done under the direction of Jenny Morgan-Douralis, Holden's chief colour and trim designer at the time.[8] Along with the styling, Holden also executed most of the engineering work and were responsible for devising the "Cruze" nameplate.[2]

GM revealed the production Cruze on 22 October 2001 with a 1 November sales commencement date in Japan.[5] Significantly, the Cruze marked GM's return to Japanese manufacturing for the first time since 1939,[9] with production located at Suzuki's plant in Kosai, Shizuoka.[10] In terms of design, the production version differs slightly from the YGM1: the flared fenders were toned down, and in lieu of the concept's 17-inch alloy wheels, 15-inch wheels were fitted. High-mounted wrap-around tail lights are featured at the rear, with dual circular brake lights set into the bumper—as carried over from the concept.[6]

Powertrains are identical to those fitted to the Suzuki, with 1.3- and 1.5-litre inline-four engines offered and coupled to either a five-speed manual or four-speed automatic transmission.[5][11][12] The M13A-equipped models were given the model code HR51S, with the M15A versions designated HR81S.[11][12] The 1.3-litre was rated at 65 kilowatts (88 PS/87 hp) and 118 newton metres (87 ft·lbf),[13] while the 1.5-litre delivered 81 kilowatts (110 PS/109 hp) and 143 newton metres (105 ft·lbf).[5] Both front- (FWD) and all-wheel drive (AWD) layouts were offered, the all-wheel system being an electronically controlled setup. This system utilises an electromagnetic controlling device that receives signals from the anti-lock braking system. Both the 1.3 and 1.5 models could be specified with either FWD or AWD.[5]

To maximise sales penetration, Japanese-market Cruzes were sold at both GM AutoWorld and Suzuki Arena sales channels. AutoWorld dealerships stocked the 1.5-litre car in LS and LT trims, with the 1.3 confined to Suzuki's Arena, available in E and X trims.[11][12][14] The vehicle was also in compliance with Japanese government dimension regulations to capitalize on the associated tax benefits to further encourage sales.

After a delay triggered by unfavourable exchange rates from Japan,[2] Holden introduced the Cruze to the Australian market on 1 July 2002.[15] New door trims were fitted and the rear window wiper was made standard from January 2004 production.[16] Holden discontinued the Cruze after January 2006.[17] The Chevrolet version in Japan continued on until 2008.

Suzuki of Europe utilised the Cruze modifications as an update of the Ignis in 2003.[18] Suzuki extended the Cruze's length by 145 millimetres (5.7 in), to improve interior room and luggage space.[19][20] This version was manufactured specifically for the European market in Esztergom, Hungary by Magyar Suzuki.[21] Suzuki in Japan did not utilise the Cruze modifications for its own Suzuki-badged model due to the presence of the Chevrolet version in that market.

The 1.3-litre version came as manual FWD, with the 1.5-litre manufactured in FWD form with both manual and automatic transmission, or as a manual transmission AWD via viscous coupling.[citation needed] Also, a diesel version was available, powered by Fiat's 1.3-litre Multijet engine.[22]

An arrangement with Subaru resulted in the Hungarian-manufactured Ignis being sold alongside the Suzuki-badged model in Europe as the Subaru G3X Justy.[23] Apart from the slightly larger fog lights, different front bumper and grille, plus badging—the Subaru was identical to the Suzuki.[24][25] Subaru debuted the Justy at the International Motor Show Germany in September 2003, going on sale immediately after.[26] Two AWD drive models were available—1.3- and 1.5-litre petrols; there was also a FWD, 1.3-litre turbocharged diesel model.[26] The G3X Justy was transferred in 2007 to the Daihatsu Boon/Sirion (M300).[27]

On 3 March 2015, the Suzuki released details of a small 4WD concept car, called the "Suzuki iM-4" at the Geneva International Motor Show.[29] On 30 October 2015, the production version, known as the Ignis was exhibited at the Tokyo Motor Show.[30] On 21 January 2016, Suzuki officially announced the launch of the Ignis in the Japanese market.[31]

The Indian-spec is known as Maruti Suzuki Ignis. It was launched as a replacement of the Maruti Ritz. It is powered by a 1.3-litre diesel engine that churns about 75bhp of power and 190Nm of peak torque. This is the same engine powers the Swift and the Baleno, however the body weight of the Ignis is lesser. This is due to the use of an all new platform. The company has confirmed that it is a modular platform and more engines shall be made on it. The other engine offered with the India-spec car is a 1.2-litre K-series unit that develops 82bhp and 113 Nm of torque. Both these engines are available with either a 5-speed MT or a 5-speed AMT gearbox. Maruti is also offering various customization options[dead link] with the car. It is being sold through the company's NEXA chain of premium dealerships.

The UK and Euro-spec Ignis is offered with two versions of the 1.2 L K12C I4 engine: a standard petrol and a hybrid with lithium-ion batteries fitted under the seats.[32]

The Indonesian-spec Ignis was launched by Suzuki IndoMobil Motor on 17 April 2017.[33][34] It is available in two trim levels: GL and GX, with manual, and semi-automatic transmissions which Suzuki called as Auto Gear Shift transmission.

The Japanese-spec Ignis that was available in Japan, Australia and New Zealand were assembled in Japan and it were powered with 1.2-Litre K-series unit that develops 88bhp (66kw) of power and 120Nm of peak torque, thats 6bhp (5kw) and 7 Nm of torque more than in the Indian-made Ignis. The transmission available is a five-speed manual or CVT rather than the Suzuki AMT gearbox (Auto Gear Shift/AGS).