The Suzuki Escudo (known as Sidekick in North America, Vitara in most of Western Europe, Bolivia, Ecuador, the Philippines, as well as North America after 1999 and the Grand Vitara in the United Kingdom, Eastern Europe, parts of South Asia and Australia) is an off-road vehicle that has been in production since 1988. The North American version was produced as a joint venture between Suzuki and General Motors known as CAMI. The vehicle was a follow-up to the popular SJ413 and Samurai. Also, this vehicle, while sold in North America, was designed to slot above the Samurai. A larger version is also made, known as the Suzuki Grand Escudo (known as Grand Vitara XL-7 in other markets).

First introduced as the Escudo in the Japanese domestic market in May 1988, the North American Sidekick became available for 1989 as a 2-door convertible or hardtop, in 1.3 liter JA and more powerful 4-wheel-drive JX & JLX trims. An 80 hp (60 kW) 1.6 liter, 8-valve, 4-cylinder engine was available on the JX & JLX. 1990 brought the deletion of the upscale JLX version. In 1991, a 4-door Sidekick with a lengthened wheelbase was introduced and the following year a 95 hp (71 kW), 1.6 liter, 16-valve engine was introduced. 1991 also brought the introduction of rear antilock brakes. The original Sidekick was updated in 1996 with a new Sport version available with 120 hp (89 kW), 1.8 liter 16-valve 4-cylinder engine. The Sport also had dual airbags, 2-tone paint and 16" Alloy wheels.

There is also a very limited edition factory special named the Vitara Rossini which came in metallic pink with a cream leather interior, only 250 of this model where produced worldwide,

In 1996, Suzuki introduced the Suzuki X-90 which was mechanically identical to the Sidekick but had a much rounder body, a trunk, and removable T-bar roof. The Suzuki X-90 disappeared from Suzuki's lineup after the 1998 model year. The Sport variant was replaced by the Grand Vitara in 1999.

In Spain, production went on at Suzuki's partner Santana with the Vitara nameplate. After a facelift in 2005 the name was changed to Santana 300/350.

In Australia, there were two models available. The Vitara JX and the Vitara JLX. The JLX featured mainly with powered windows. Both versions featured the 1.6 Litre engine. In May 1997, Suzuki introduced the 1995 cc 2.0 Litre 4 Valves/Cylinder Double Overhead Cam engine with both soft top and hardtop 3 door models. This engine was rated at 97 kW (130 hp) at 6300 rpm. At the same time the 5 door models received the 1998 cc 2.0 litre V6. Engine power rated for the 5 door V6 models was at 100 kW (134 hp) at 6500 rpm. The 1.6 litre variant for the 3 door models were named the Suzuki Vitara Rebel. All models in Australia were sold as four wheel drives.

The naming scheme, engines and trim options available in Chile, closely follow that of the Australian market. In 1998, there became available models featuring 1.9 litre turbodiesel engines from Renault, built in Spain by Santana Motors, all of them were 4WD vehicles, but there were no automatic transmissions available. Since 2001, all diesel 1st Gen Vitaras are to be imported from Argentina, built by General Motors in Argentina, featuring 1.9 litre HDI engines from PSA, all of them with 5-speed mechanic transmissions, while automatic transmissions are only available with Japanese built models with gasoline engines. 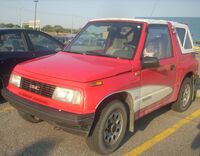 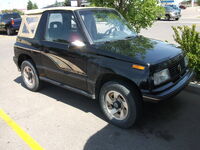 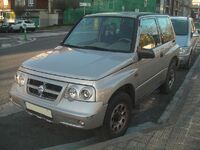 The Escudo/Vitara was redesigned in 1999, and the Sidekick name was dropped in North America, using the Vitara name instead. It was a 4-seater which in Europe featured 1.3 L, 1.6 L and 1.8 L straight-4 gasoline engines available with carburator or electronic fuel injection. A 16-valve 1.8 liter gasoline engine and a 2.0 liter V6. Diesel engines were also available in Europe. The Vitara was available with 4- and 5-speed manual transmissions, as well as automatic transmission, and in hardtop 2- or 4-door models or soft-top 2-door models.

In North America, the regular Vitara (not Grand Vitara) was available with a 1.6 and 2.0 four cylinder, with the vast majority of 1.6 liter motors being found in the two door variants and the 2.0 in the four door versions. A 2.5 liter V6 was also available, and became standard in 2004. All were available with manual transmissions and four wheel drive, via a manual transfer case.

The Vitara and Grand Vitara were facelifted in 2002 and again in 2004. As of 2003, the smaller Suzuki Vitara has been withdrawn from the North American market. Sales were slow, with just 4,860 sold in 2004 for the United States. In Canada, sales were strong. All North American Vitaras were built at CAMI Automotive in Ingersoll, Ontario, while the North American Grand Vitaras were built in Japan, where it is the badged "Suzuki Escudo". The 2006 model has had a structural redesign with a new ladder-boxed chassis integrated into a unibody construction. The Vitara was the last compact SUV sold in the US to retain a body on frame construction until the 2006 model year, when Suzuki phased it out for the newer unibody Grand Vitara.

The 2001 model Suzuki Grand Vitara comes standard as a 2.0 Liter 4WD vehicle in New Zealand. The 2005 and onwards Grand Vitara is sold in Ecuador by Chevrolet, yet it still retains its Suzuki badges.

The Grand Escudo was a longer larger, pricier and more powerful version of the regular five-door. The Japanese market "Grand Escudo" was sold in North America, Chile and Australia as the Suzuki XL-7.

The second generation was replaced in the fall of 2005 by a new vehicle using some components of the GM Theta platform, and is built in Japan. The 2006 Escudo was developed independently by many of the same Suzuki engineers who developed the Theta. Although it uses some Theta componentry, especially in the suspension, it is quite different and should not be considered a Theta vehicle. Notably, it uses a longitudinally-mounted engine and is rear-wheel drive with a 103.9 in (2639 mm) wheelbase, while all other Theta vehicles are transverse engined with front-wheel drive as the default. All can also be ordered with all-wheel drive as well, however. The contemporary generation Suzuki XL7 (starting in model year 2007) was a true Theta vehicle, and was built alongside the Chevrolet Equinox and Pontiac Torrent at CAMI Automotive in Ingersoll, Ontario, Canada.

The vehicle is also mass produced in Iran by Iran Khodro Manufacturing Co.[1]

In Ecuador, this version of the SUV is known as Suzuki Grand Vitara SZ.