A street sweeper or street cleaner may refer to either a person's occupation, or a machine that cleans streets. A street sweeper cleans the streets, usually in an urban area. - Also known as Road sweepers in some areas.

Street sweepers have been employed in cities since sanitation and waste removal became a priority. A street-sweeping person would use a broom and shovel to clean off litter, animal waste and filth that accumulated on streets. Later, water hoses were used to wash the streets.

Machines were created in the 19th century to do the job more efficiently. Today, modern street sweepers are mounted on truck bodies and can vacuum debris that accumulates in streets.

Mechanical sweepers in the United Kingdom

By the 1840s Manchester England, became known as the first industrial city. Manchester was home to the first passenger rail service in the world and had one of the largest textile industries of that time. As a result, the robust metropolitan, was said to be England’s unhealthiest place to live.[1] In response to this unsanitary environment, Joseph Whitworth invented the mechanical street sweeper. The street sweeper was designed with the primary objective to remove trash from streets in order to maintain aesthetic goals and safety.[2][3]

Mechanical sweepers in the United States

The very first street sweeping machine was patented in 1849 by its inventor, C.S. Bishop. For a long time, street sweepers were just rotating disks covered with wire bristles. These rotating disks served as mechanical brooms that swept the dirt on the streets.[4]

John M. Murphy called at the offices of American Tower and Tank Company in Elgin, IL in the fall of 1911. He had a plan of a motor driven pickup street sweeper. The American Tower and Tank Company had been formed in 1903 by Charles A. Whiting and James Todd. They called in a recently acquired silent partner, Daniel M. Todd, and it was decided to hire Mr. Murphy and begin the development of his idea. That started what has become the Elgin Sweeper Company.[5]

After two years of trial, development, experimentation, and research, there was achieved the sweeper that Murphy was satisfied performed all of the sweeping functions in the manner he had envisioned – one which partners James and Daniel M. Todd and Charles A. Whiting were willing to risk a reputation gained from 30 years manufacturing experience.[5]

In the fall of 1913, the City of Boise, Idaho purchased the first Elgin Sweeper, following a demonstration. Boise Street Commissioner, Thomas Finegan, made a comparison showing a savings of $2,716.77 from the Elgin motorized sweeper when used rather than a horse-drawn sweeper.[5]

Following its introduction and initial sales, John M. Murphy continued the perfection of his sweeper. In 1917, US patents were filed and issues for J. M. Murphy, Street Sweeping machine #1,239,293.[5] 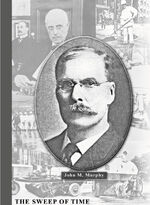 The goal of simple debris removal did not change until the 1970s, when policymakers begun to reflect concern for water quality. In the United States, The lag time in which street sweepers responded can be pinpointed to the Runoff Report of 1998.[6] As older street sweepers were only effective in removing large particles of road debris, small particles of debris remained behind in large quantities.[7] The remaining debris was not seen as an aesthetic issue because rain would wash them away. Today, small particles are known to carry a substantial portion of the stormwater pollutant load.

Modern street sweepers are equipped with water tanks and sprayers used to loosen particles and reduce dust. The brooms gather debris into a main collection area from which it is vacuumed and pumped into a collection bin or hopper.

A regenerative air street sweeper uses forced air to create a swirling effect inside a contained sweeping head and then uses the negative pressure on the suction side to place the road debris inside a hopper. Debris is removed from the air by centrifugal separation and reused, keeping particulate matter inside the hopper. Many regenerative air sweepers are AQMD certified by the company who manufactures them and can pick up particles as small as 10 micrometres or less (PM-10), a leading cause of stormwater pollution. 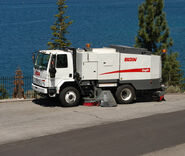 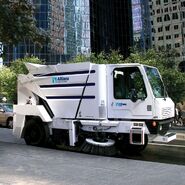 Single-engine Scarab Sweepers street sweeper in the pictured at the Dubai Autodrome, November 2006

Bristles underneath truck are made of metal 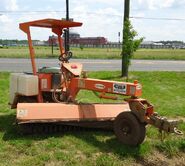