Steiger was founded near Red Lake Falls, Minnesota, USA by Douglas and Maurice Steiger, brothers who needed a reliable, high-powered, articulated four-wheel drive tractor in 1957. The tractor division of Steiger Farms was moved to Fargo, North Dakota in 1969.

Steiger has been one of the few successful mass-producers of 4WD tractors in the world. But a several have been sold branded as other big Marques machines. Steiger has built tractors for various other tractor manufacturers & distributors under the International Harvester, Ford, Allis-Chalmers, and Co-op Implements names. Steiger also licensed their tractor designs to RÁBA of Hungary, which built RÁBA and RÁBA-Steiger tractors. Vandel, of France, also licensed the Steiger design and built tractors under their name, as well as Macrosa/CIDEF in Argentina.

In the 1970s, International Harvester company of Chicago, Illinois purchased a 30% stake in the company. This stake was later sold to Deutz-Fahr of Germany in 1982. Case IH, formed from the merger of Tenneco's Case with the agricultural arm of International Harvester, purchased Steiger in 1986, and the familiar lime-green color of Steiger's was retired as Case IH's red took over. The Steiger name disappeared for a while, but has been re-introduced on the 4WD tractors in Case IH's stable.

From 1982 till 1986 Steiger built the FW-series of High Power tractors for Ford.

For the mid 80's, sign a deal with Zanello to produce and transfer technology of its products with the American firm Steiger (currently Case), in order to export tractors to the United States and Canada. Being one of the few articulated tractors of medium and high power, Steiger demanded 600 Zanello units, being marketed under the PUMA model. This commercial agreement, nevertheless, did not manage to maintain to future, since Steiger fell in misfortune and 6 months later it was bought by J.I. Case.

But after Case IH bought out Steiger in 1986, Ford then bought Versatile of Canada.

Steiger in the UK[edit | edit source]

Steiger's were first imported into the UK by a Warwickshire farmer after a High HP tractor. The UK imports were generally fitted with CAT engines, which meant the local CAT dealer could service them & sort out any engine warranty issues, and as they had a good reputation are perceived as more reliable.

One problem with these Super tractors was there was no UK equipment to suit them, as they were twice as big as a Doe Triple D. So Dowdeswell was asked to build some custom implements for use with the new Steiger tractors in the UK.

Later Ford introduced the FW-20, FW-30 & FW-60 tractors, which were built by Steiger for Ford. In the UK Ford then bought out the existing importers stock and service / order book to gain a ready market, but they only sold the FW30 & FW60 models in the UK market.

Following the takeover by Tenneco (Case IH), there was some range adjustments and the Case IH high-hp range was dropped in favour of the former Steiger models.

When the Case IH 9300 series was introduced in 1996 the popular Steiger branding was revived with a large STEIGER badge in the center of the grill. An expanded hp range was again available topping out with the 425 hp Cummins N14 equipped 9390.

In 1998 the Quadtrac nameplate was introduced with the Quadtrac 9370 and Quadtrac 9380. These tractors featured four positively driven triangular shaped tracks, one at each corner in place of the tires. These tracks offer increased flotation and traction as well as reduced soil compaction. They are also easier to turn in wet conditions and cause significantly less berming in turns than their two tracked competition.

In 1999 CNH Global was created from the merger of Case IH and New Holland. Following the merger the group introduced an all new tractor that was to act as a shared platform for both comapnies. The new Case IH line was now designated as the STX series Steiger tractors. The Steiger name was still displayed on the grill, this time in the lower right hand corner. Four new models were available including the STX275, STX325, STX375 and STX440. These tractors featured upgraded, high flow hydraulics, 16 speed full powershift transmissions, luxury cabs, and state of the art electronics. Updated engines soon brought the top model's hp to 450, 480, 500 and then 530. Beginning around 2006(?) CNH began switching the lower hp models over to the IVECO engines produced by parent company Fiat S.p.A..

In January of 2005 the Case IH Fargo tractor plant celebrated the production of 50,000 tractors carrying the Steiger nameplate.

2007 saw a return to the original Steiger nameplate and the removal of the STX designation. The Quadtrac models, however, no longer carry the Steiger nameplate. It has been dropped and replaced with a Quadtrac decal where the Steiger decal is found on the wheeled versions. By 2008 the only Cummins engine left in the lineup was the 535 hp QSX 15.

For the 2011 model year, Case IH introduced an updated tractor featuring new sheet metal and an new hood and grill to house the new Tier IVi engines featuring SCR. All engines are now sourced from Fiat Powertrain Technologies with Cummins being dropped from the lineup. Other new features include new controls and an updated cab that includes optional suspension. Models range from 350 to 600 hp. 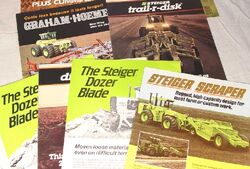 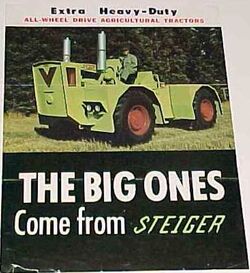 Models by Steiger for other Companies[edit | edit source]

Several were imported by Offchurch Tractors between 1976 & 1982, with some still in use today.

Retrieved from "https://tractors.fandom.com/wiki/Steiger?oldid=204158"
Community content is available under CC-BY-SA unless otherwise noted.