A steam wagon (steam lorry or steam waggon) is a steam-powered road vehicle for carrying freight. It was the earliest form of lorry (truck) and came in two basic forms: overtype and undertype – the distinction being the position of the engine relative to the boiler. Manufacturers tended to concentrate on one form or the other.

Steam wagons were the dominant form of powered road traction for commercial haulage in the early part of the twentieth century, although they were a largely British phenomenon, with few manufacturers outside Great Britain. Competition from internal-combustion-powered vehicles and adverse legislation meant that few remained in commercial use beyond the Second World War.

Although the majority of steam wagons have been scrapped, a significant number have been preserved in working order and may be seen in operation at steam fairs, particularly in the UK.

The undertype designs have the engine under the chassis (although the boiler - usually a vertical type - remains in the cab), and generally resemble motor lorries rather than traction engines. Undertype designs had the benefit of a fully-enclosed cab, and a much shorter length for the same carrying capacity.

The earliest examples of either type had steel or wooden wheels, later followed by solid rubber tyres. Various developments, such as fully enclosed cabs and pneumatic tyres, were later tried by companies in a bid to compete with internal combustion engine-powered lorries. Some wagons built to run on solid tyres were later converted to pneumatic tyres.

Following a relaxation in the legislation covering the use of steam-powered vehicles on common roads, manufacturers started to investigate the possibility of using steam power for a self-contained goods vehicle. Prior to this point, goods were carried in a trailer towed behind a traction engine.

The first steam 'wagon' dates from around 1890. It was based around a traction engine which was fitted with a removable tipper body behind the tender (the rear body of a traction engine, where the driver stands). This was successfully demonstrated at an agricultural show but was not put into production. Subsequently, wagon designs were built around a rigid chassis, with the body, engine and boiler attached to it.

Steam lorries were the best road lorries of their day. The Sentinel S4 was easily capable of attaining 60 mph (97 km/h) at a time when petrol lorries would be lucky to achieve 35 mph (56 km/h), the Sentinel DG's could reach 40 mph (64 km/h) (considerably more than their listed speed) and the Foden lorries were limited only by speed limits placed on them – the makers even offered alternative gearing capable of twice the speed limit although they were still not as fast as the Sentinels.

Steam wagons were still in commercial use at Brown Bayley Steels during the 1950s.

Why road steam disappeared in the UKEdit

Road steam disappeared through becoming uneconomical to operate, and unpopular with British governments. By 1921, steam tractors had demonstrated clear economic advantages over horse power for heavy hauling and short journeys. However, petrol lorries were starting to show better efficiency and could be purchased cheaply as war surplus; on a busy route a 3-ton petrol lorry could save about £100 per month compared to its steam equivalent, in spite of restrictive speed limits, and relatively high fuel prices and maintenance costs.[1]

Throughout the 1920s and 1930s successive governments placed tighter restrictions on road steam haulage, including speed, smoke and vapour limits[2], and a 'wetted tax', where the tax due was proportional to the size of the wetted area of the boiler; this made steam engines less competitive against domestically-produced internal combustion engined units (although imports were subject to taxes of up to 33%).

As a result of the Salter Report on road funding, an 'axle weight tax' was introduced in 1933 in order to charge commercial motor vehicles more for the costs of maintaining the road system, and to do away with the perception that the free use of roads was subsidising the competitors of rail freight. The tax was payable by all road hauliers in proportion to the axle load; it was particularly damaging to steam propulsion, which was heavier than its petrol equivalent.[3]

Initially, imported oil was taxed much more than British-produced coal, but in 1934 Oliver Stanley, the Minister for Transport, reduced taxes on fuel oils while raising the Road Fund charge on road locomotives to £100 pounds a year, provoking protests by engine manufacturers, hauliers, showmen and the coal industry. This was at a time of high unemployment in the mining industry, when the steam haulage business represented a market of 950,000 tons of coal annually. The tax was devastating to the businesses of heavy hauliers and showmen, and precipitated the scrapping of many engines.[4]

There were almost 160 manufacturers of steam wagons.[5]

Many traction engine builders also built forms of steam lorry, but some firms specialised in them.

John I. Thornycroft & Company was an established marine engineering company that successfully spawned the Steam Carriage and Wagon Company for the production of steam-powered road vehicles. They supplied steam lorries to the British Army, commercial steam wagons and vans, steam cars (for a few years), and buses – London's first powered bus was a Thornycroft double-decker steam bus.

Manufacturers who specialised in the construction of steam lorries include:

The 1928 film The Wrecker features a spectacular crash between a passenger train and a Foden steam lorry stuck on a level crossing. The scene was filmed at Herriard on the Basingstoke and Alton Light Railway, in one take, and destroyed both the steam wagon and the SECR F1 Class locomotive.[11]

The 1975 Disney film One of Our Dinosaurs is Missing featured a steam lorry in a (literally) supporting role. It was used as the 'getaway vehicle' for the theft of a large dinosaur skeleton from the Natural History Museum. It was involved in a lengthy chase sequence through the streets of London – as a result, the steam lorry – and the dinosaur – featured prominently on the film's posters and video/DVD case artwork.[citation (source) needed] The lorry was based on an unknown prototype: a long-wheelbase undertype, with a small vertical boiler mounted unconventionally off-centre in the cab, and no windscreen.

A steam lorry is the featured character in the 2002 Thomas and Friends episode "Elizabeth the Vintage Lorry" (Series 6, Episode 5).

For details of examples in preservation see the individual makers articles. 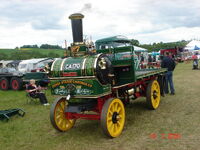 Wikimedia Commons has media related to:

Wikimedia Commons has media related to:

Retrieved from "https://tractors.fandom.com/wiki/Steam_wagon?oldid=66451"
Community content is available under CC-BY-SA unless otherwise noted.