The Standard Vanguard is a car produced by the Standard Motor Company in Coventry from 1947 to 1963.

The car was announced in July 1947. It was completely new with no resemblance to the previous models, and was Standard's first post-Second World War car. It was also the first model to carry the new Standard badge, which was a heavily-stylised representation of the wings of a Griffin.[1]

In the wake of the Second World War many potential customers in the UK and in English-speaking export markets had recently experienced several years of military or naval service, therefore a car name related to the British Navy carried a greater resonance than it would for later generations. The name of the Standard Vanguard recalled HMS Vanguard, the last of the British Navy's battleships, launched in 1944 amid much media attention: permission to use the name involved Standard in extensive negotiations with senior Royal Navy personnel.[citation (source) needed]

The styling of the car resembled the pre-war Plymouth with a sloping "beetle-back". Russian media claimed that styling of this car had been in part influenced by Russian GAZ-M20 Pobeda, which had been in development from 1943 and went into production in 1946. In 1952 The Motor magazine stated that the Soviet Pobeda "shows a certain exterior resemblance to the Standard Vanguard", disregarding the fact that the Pobeda had been launched a year before the Vanguard.[2]

The same wet liner engine was used throughout the range until the advent of the Six model in 1960 and was an overhead valve unit of 85 mm (3.3 in) bore and 92 mm (3.6 in) stroke with single Solex downdraught carburettor. The compression ratio was 6.7:1 on early engines increasing to 7.0:1 on the Phase III and 8.0:1 on the Sportsman. Wet cylinder liners were fitted. The engine was very similar to the ones made by Standard for the Ferguson tractor that they were making in large numbers.

The transmission at first was by a three-speed gearbox with synchromesh on all forward ratios.

In Scandinavia Standard marketed the Standard Ten saloon as the Vanguard Junior.

The car used a conventional chassis on which was mounted the American inspired semi-streamlined four-door body, which resembles a Plymouth. Suspension was independent at the front with coil springs and a live axle and leaf springs at the rear. Front and rear anti-roll bars were fitted. The brakes were hydraulic with 9 inch (228 mm) drums all round. To make the most of the interior space a column gear change was used.

In line with the post-war British export drive, virtually the total output was exported for the first two years of production and only in 1950 did significant home market deliveries start. The Vanguard was intended to achieve export sales- with a particular focus on Australia. During the immediate post war period, cars were in short supply, creating a "seller's market". Restricted availability of the Vanguard helped attract willing buyers.

An estate car joined the range in 1950 and, for Belgium only, some convertibles were made by the Impéria coachbuilding company. Laycock-de-Normanville overdrive became available from 1951. The body was updated in 1952 with a lowered bonnet line, a wider rear window and a new grill featuring a wide horizontal chrome bar in place of the narrow more closely packed slats of the original grill.[4]

The Swiss importer for the Vanguard was an energetic firm called AMAG, which later took on the Swiss Volkswagen franchise. AMAG themselves assembled the Swiss market Phase I Vanguards,[4] and it was at the Geneva Motor Show in March 1953[5] that an extensive re-design was unveiled: the Phase II Vanguard was of a contemporary Ponton, three-box design "notch-back" design. Boot/trunk capacity increased by 50% in comparison to that of the Phase I, and visibility was improved with a further enlarged rear window.[4] Mechanically there were few changes but the clutch changed from cable to hydraulic operation and the engine compression ratio increased to 7.2:1. The previously fitted anti-roll bar was no longer used. Wider 6.00x16 tyres were fitted to improve road holding.

In February 1954 Standard became the first British car maker to offer a diesel engine as a factory fitted option.[6] The chassis was stiffened to take the weight of the heavier engine and performance suffered with 65 mph (105 km/h) about the top speed. Like the petrol engines, the diesel was a Standard-built "20C" engine developed for the Ferguson tractor. Whilst diesels fitted to the tractor were restricted to 2200 rpm and developed 25 horsepower (19 kW), road-going engines in Vanguards had no limiter and so produced 60 horsepower (45 kW) at 3800 rpm. However, they retained the tractor's "Ki-Gass", de-compressor and over-fuelling systems, all of which had to be manually operated when starting the engine from cold. Only 1973 diesel Vanguards were made.[citation (source) needed]

The Phase III was a radical change with the elimination of the separate chassis. There was an overlap in availability of the old model with the Phase II estate continuing into 1956.

The 2088 cc engine with its single Solex downdraught carburettor produced 68 bhp (51 kW/69 PS). The front suspension was independent using coil springs and was bolted to a substantial sub-frame which also carried the recirculating ball steering gear. Semi elliptic leaf springs were used on the rear axle. Lockheed hydraulic brakes with 9 in (229 mm) drums were fitted front and rear. The four speed gearbox had a column change and the optional overdrive was operated by a switch on the dash.

The new body was lower and had an increased glass area making it look much more modern and the old two piece flat windscreen gave way to a one piece curved design. The wheelbase increased by 8 in (203 mm) giving much better passenger accommodation. The heater was now a standard fitting. Bench seats were fitted in front and rear with folding centre arm rests. They were covered in Vynide with leather available as an option.

The car was lighter than the superseded model and the gearing was changed to deliver better economy with performance virtually unchanged.

A performance model, intended to be badged as the Triumph Renown until shortly before launch, the Vanguard Sportsman was announced in August 1956 with a tuned 90 bhp (67 kW/91 PS) engine having several features seen on the Triumph TR3 sports car. These included an increased compression ratio to 8.0:1, twin SU carburettors and improved pistons. The final drive ratio was lowered to 4.55:1 to give better acceleration and larger 10 in (254 mm) drums fitted to the brakes. The standard version had a bench front seat but separate seats were an option.

A basic model, the Ensign, with 1670 cc engine was announced in October 1957 and this continued to use the basic Vanguard body shell after the Vanguard itself was replaced by the Michelotti restyle. Many were bought by the Royal Air Force and in total 18,852 were made. A de-luxe version followed in 1962 and 1963 with larger 2138 cc engine.

In January 1960 a Diesel engined Standard Ensign was announced, featuring the compact "P4C" 1.6 litre 4 cylinder engine produced by specialists Perkins of Peterborough.[11] Claimed output was 43 bhp with fuel consumption, impressively, stated as "about 50 mpg".[11] Those values, given the size of the car, suggest relatively modest top speed and acceleration figures.

A face lift of the Phase III was designed by Italian stylist Giovanni Michelotti and coachbuilders Vignale in 1958 and introduced for the October 1958 Earls Court Motor Show.[12]. The windscreen and rear window were deeper and the door windows received stainless steel frames. There was a new front grille and rear light clusters. A floor change for the four-speed manual gearbox was now an option to the standard provision of a three-speed with column change. Either option could have an overdrive added.

The car had bench seats front and rear covered as standard in Vynide with leather as an option on the home market and cloth for export. A heater and, unusual for the time, electric screen washers were factory fitted but a radio remained an option.

Introduced at the end of 1960, the last of the Vanguards featured a six-cylinder 1,998 cc engine with push-rod overhead valves: this was the engine subsequently installed in the Triumph 2000. The compression ratio was 8.0:1 and twin Solex carburettors were fitted giving an output of 80 bhp (60 kW) at 4500 rpm.[13] Externally the only differences from the Vignale were the badging but the interior was updated.

Both the Ensign and the Vanguard were replaced in 1963 by the Triumph 2000 and the Standard name disappeared from the British market after 60 years.

In 1950 the Australian subsidiary of the Standard Motor Company introduced a Coupé utility version of the Vanguard Phase I. It was fitted with the same 2088 cc four cylinder engine as used in the saloon.[14] Utility versions of the Phase II, Phase III and Vanguard Six were also produced in Australia over the following years[15] with production ending in 1964.[16] 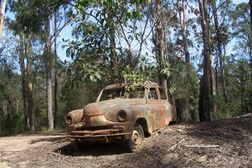 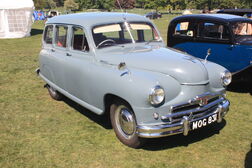 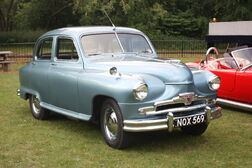 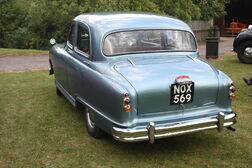 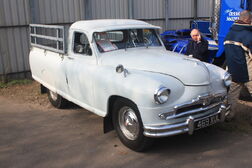 A Pickup version at the Donnington Park CV show 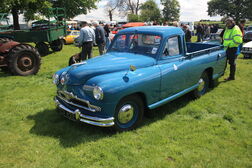 TCV 432 in RAF Livery
Add a photo to this gallery

Retrieved from "https://tractors.fandom.com/wiki/Standard_Vanguard?oldid=184362"
Community content is available under CC-BY-SA unless otherwise noted.