A snowplough (also spelled snow plough or in US snowplow snow plow, see miscellaneous spelling differences) is a device intended for mounting on a vehicle, used for removing snow and ice from outdoor surfaces, typically those serving transportation purposes. Although this term is often used to refer to vehicles fitted with such devices, more accurately they are known as winter service vehicles, especially in areas that regularly receive large amounts of snow every year, or in specific environments such as airfields. In other cases, pickup trucks and front end loaders are outfitted with attachments to fulfill this purpose when required. Some regions that do not frequently see snow may use graders and other equipment for this task, but graders are nonetheless the best equipment[citation needed] to remove compacted snow and ice off the streets. Snowploughs can also be mounted on rail cars to clear railway tracks.

A snowplough works by using a blade to push snow to the side or straight ahead, clearing it from a surface. Modern ploughs may include a great deal of technology to make the job—and staying on the road—easier, such as Global Positioning System receivers, head-up displays and infrared cameras.

Large custom snowploughs are mainly used at major airports in North America. These ploughs have oversized blades and additional equipment like a rotating sweeper broom (sometimes called jetblade) and blowers at the rear of the plow.

For footpaths (sidewalks) and narrow laneways small tractor mounted ploughs (tracked or wheeled) are used in Canada and the United States.

Underbody scrapers are sometimes mounted on vehicles in residential and urban settings, operating on principles similar to a road grader, but allowing greater weights and speed along with the carriage of a road treatment applicator in some countries.

Newer technology has allowed the use of articulated plough systems which can clear multiple divided highway lanes simultaneously; jurisdictions adopting this technology include Ontario Canada, along with Minnesota and Missouri in the US.[1]

In some European countries with high snow falls they use variable width ploughs and special buckets fitted with wings on wheeled loaders fitted with snow chains or studded tyres.

The first snowploughs were horsedrawn wedge-ploughs made of wood. With the advent of the car (automobile), a number of inventors set about to improve existing snowploughs. In the US, patents were issued for snowplow improvements at least as early as 1920.

In 1923, the brothers Hans and Even Øveraasen of Norway constructed an early snowplough for use on cars. This proved to be the start of a tradition in snow-clearing equipment for roads, railways[2][3] and airports, as well as the foundation of the company Øveraasen Snow Removal Systems. Carl Frink of Clayton, New York, USA was also an early manufacturer of automobile-mounted snowploughs. His company, Frink Snowplows, now Frink-America, was founded by some accounts as early as 1920.[4]

In many countries, railway locomotives have small snowploughs permanently attached to their bogies, which also serve as pilots. With others, the snowplough forms part of the obstacle deflector below the bufferbeam. Bolt-on versions also exist, and these attach to the bufferbeam or front coupler. However, larger snowploughs exist, which tend to be conversions rather than purpose-built vehicles. Steam locomotive tenders, large diesel locomotive bogies and various freight vehicles have been used, with the snowplow body mounted on the original frames. They are one-ended, with conventional coupling equipment on the inner end.

Conventional operation may see one or two locomotives running together with a snowplough at either end. This enables a snow clearance train to reverse direction quickly if it gets stuck. Alternatively, a single locomotive with bogie plows can act as a self-propelled snowplough by running light engine.

In countries like America were ride on mowers and garden tractors are common they are often fitted with small blades for snow clearing during the winter months. Other machines are walking tractors fitted with a blade in place of the rotavator head or ploughshare, with some being equipped with a snow blower head.

Ski resort operators use specialist tracked units fitted with large blades to prepare the ski runs and form jumps for skiers and snowboarders.

Massey Ferguson MF20 industrial used by MF around the factory. 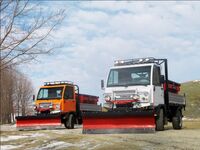 Retrieved from "https://tractors.fandom.com/wiki/Snowplough?oldid=191645"
Community content is available under CC-BY-SA unless otherwise noted.