Tractor & Construction Plant Wiki
Register
Don't have an account?
Sign In
Advertisement
in: All articles with unsourced statements, Sidecars

A sidecar is a one-wheeled device attached to the side of a motorcycle, scooter, or bicycle,[1] producing a three-wheeled vehicle.

A sidecar appeared in a cartoon by George Moore in the January 7, 1903, issue of the British newspaper Motor Cycling. Three weeks later, a provisional patent was granted to Mr. W. J. Graham of Graham Brothers, Enfield, Middlesex. He partnered with Jonathan A. Kahn to begin production. A motorcycle with a sidecar is sometimes called a combination, an outfit, a rig or a hack.

A sidecar motorcycle is a three-wheeled vehicle with the side wheel not directly aligned with the rear motorcycle wheel, and is usually powered by the rear wheel only. This is different from a motor tricycle (trike), where both rear wheels are powered and share a common axle. However, either P.V. Mokharov of the Soviet Union or H.P. Baughn of Great Britain seem to have to been the first to employ a driven sidecar wheel in 1929. Baughn two-wheel-drive outfits were so successful in trials events in the early 1930s that there were attempts to have the ACU ban them from competition. A great many companies experimented with two-wheel drive in sporting events and indeed many companies employed them in military vehicles prior to the commencement of WWII. Currently, the Russian manufacturer Ural produces several models with two-wheel drive that can be engaged as desired.

The sidecar consists of a frame (which originally was rigidly fixed to the motorcycle's frame on one side and is supported by the sidecar's wheel on the other side) and of a body. The body typically provides one passenger seat and a small trunk compartment behind. In some case the sidecar has a removable soft top. In some modifications the sidecar's body is used for carrying cargo or tools, like a truck's platform). The sidecar is typically mounted so that the motorcycle is closer to the center of the road, i.e. with the sidecar on the right for right-hand traffic.

In 1913, American inventor Hugo Young, of Loudonville, Ohio, designed a new sidecar which was not rigidly fixed to the motorcycle. Instead, his invention employed a flexible connection, which allowed the sidecar to turn, raise, and lower without affecting the balance of the motorcycle. This was a great improvement over the original design, allowing for much safer and more comfortable experiences for both the passenger and driver. Young opened up the Flxible Sidecar Company (the first "e" was dropped to allow for trademarking the name) in Loudonville, Ohio and soon became the largest sidecar manufacturer in the world. When the motorcycle craze began to fade in the 1920s due to more affordable cars being marketed, as well as the banishment of sidecar racing in the United States, the Flxible Sidecar Company began producing transit buses, ambulances, and hearses.

A sidecar makes the handling of a bike asymmetrical. Without a brake on the non-driven sidecar wheel, the sidecar will pull towards the bike under braking, and towards the sidecar under acceleration. While a sidecar pilot is described as driving rather than riding, with all but the heaviest rigs, the comparison to a car is weak. Driver and passenger body position affect higher speed handling, especially on dirt or other uneven surfaces. If the sidecar and bike geometry are not coordinated the combination will be unstable, especially at speed, with shimmy upon acceleration or deceleration, becoming a dangerous problem.

The motorcycle's steering geometry, originally set up for a tilting single track vehicle, is set up to turn slightly away from the drag imposed by the sidecar. Leaning the motorcycle by clamping it rigidly a few degrees opposite the sidecar is used, along with a few degrees of "toe-in" of the sidecar wheel toward the centerline of the vehicle, is used to provide a balance resulting in comfortable, straight line travel. Most sidecars are also fitted with steering damping devices, of either friction or hydraulic type, to lessen the effects of sudden inputs, as encountered on rough roads, upon the vehicle's handling.]],[2]

Sidecars have been manufactured since early in the twentieth century. Until the 1950s sidecars were quite popular, providing a cheap alternative to passenger cars; they have also been used by armed forces, police and the UK's AA and RAC motoring organisations. During WWII, German troops used many BMW and Zündapp sidecar motorcycles. On German, French, Belgian, British and Soviet military sidecars, the side wheel was sometimes also driven, sometimes using a differential gear, to improve the vehicle's all-terrain ability.

Although sidecars have become much less common since the mid 1950s, a number of manufacturers worldwide have continued to produce sidecars for many popular motorcycles and scooters. Active sidecar manufacturing companies include:

Sidecar racing events exist in Motocross (see Sidecarcross), Enduro, Grasstrack, Trial, road racing and Speedway with sidecar classes. The sport has followers in Europe, United States, Japan, Australia and New Zealand. The sidecars are often classed by age or engine size, with historic sidecar racing often being more popular than its modern counterpart. Older classes in road racing generally resemble solo motorcycles with a platform attached, where modern racing sidecars are low and long and borrow much technology from open wheel race cars. In all types of sidecar racing there is a rider and a passenger who work in unison to make the machine perform, as they would be almost unrideable without the passenger in the correct position.

Road racing sidecars began to change away from normal motorcycle development in the 1950s with them becoming lower and using smaller diameter wheels and they kept the enclosed "dustbin fairing" banned in solo competition in 1957. By the 1970s they were using wide slick tyres with a square car like profile, the rider kneeled behind the engine instead of sitting on a seat and the motor of choice was generally a 500 cc two stroke. In the late 1970s sidecars began to appear with hub centre steering and later the engines moved to the rear of the rider, to lower the centre of gravity further still, making the sidecar very long. Sidecars raced in the world championship known as Superside are all hub centre long monocoque framed machines, the most common being LCR, ART or Windle, with 1,000 cc four-cylinder four-stroke engines, the most popular being the Suzuki GSX-R1000.

These at club and national level are known as Formula One sidecars, as opposed to Formula Two. Formula Two sidecars are short front engined bikes, which must have a frame made of steel tube and have leading link forks as monocoques and hub centre steering is banned. Engines are 350 cc two strokes or 600 cc four strokes. F2 sidecars are raced in their own championship but are often on track at the same time as the F1s, but competing for their own points. Since 1990 at the Isle of Man TT, the Sidecar TT has been solely contested by Formula Two sidecars as Formula Ones were deemed too fast, then lapping at 108 mph (174 km/h) average. By 2006 however, F2s were faster than this lapping at 116 mph (187 km/h).

Sidecars are normally fitted on the near-side of motorcycles so that the rider is on the off-side, just as car-drivers are seated. In Australia and the UK. imported continental or US right-hand sidecars would be on the off-side, and are prohibited.

In the Republic of China (Taiwan), Article 39-2 of the Road Traffic Security Rules (zh:道路交通安全規則) prohibits the registration of new motorcycles with sidecars but does not specifically restrict fitting them later.

Sidecars have sometimes been fitted on bicycles. The "Watsonian" brand was popular from the 1930s to the 1950s in the UK. There remains the problem of applying side-thrust to light-weight components only intended and built to resist radial forces.[citation needed] However, the Philippine trisikad is usually of that configuration. 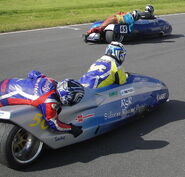