Tractor & Construction Plant Wiki
Register
Don't have an account?
Sign In
Advertisement
in: Dynamic lists, Brands, Companies of the United Kingdom,
and 10 more

Scammell Lorries Limited was a British manufacturer of trucks, particularly specialist and military off-highway vehicles, from 1921 to 1988.

Scammell started as a late-Victorian period wheelwright and coach-building business in Spitalfields, London.

In 1921, the company exhibited its first articulated vehicle, capable of carrying 7.5 tons, at the Olympia Motor Show. With the demand for this vehicle, the company first moved to a new works in Watford, and then formed Scammell Lorries Ltd in July 1922.

In 1934, Scammell produced the 'Mechanical Horse', designed by Oliver Danson North to replace horses in rail, postal and other delivery applications. This featured automatic carriage coupling and the single front wheel could be steered through 360 degrees. It was sold in 3 and 6 ton versions. The 3-tonner was powered by a 1,125 cc side-valve petrol engine and the 6-tonner by a 2,043 cc engine. Karrier had introduced a similar vehicle, the 'Cob', four years earlier.

From 1937, a Citroën Traction Avant powered version was made under licence in France, by Chenard-Walcker-FAR, known as the 'Pony Mécanique'. This continued in production, in various versions, until 1970.

In the late 1940s, the 'Mechanical Horse' was superseded by the Scarab', with similar features but now with a 2,090 cc side-valve petrol engine in both models and a diesel version with a Perkins engine.

In 1967, the 'Scarab' was replaced by the Townsman, which had a fibre-glass cab.

The company mainly concentrated on articulated and rigid eight-wheeler lorries, from the 1920s. One vehicle not in those lines that became well-known was the six-wheeled Pioneer. This was an off-highway heavy haulage tractor first produced in 1927. It showed outstanding cross-country performance due to the design that included a sideways rocking front axle, and 2ft of vertical movement for each of the rear wheels.

The Pioneer was popular in the oil field and forestry (logging) markets, and formed the basis of the British Army's World War II 30-ton tank transporter. With the outbreak of war, development of new vehicles stopped and production concentrated on military Pioneers for use as artillery tractors, recovery and transporter vehicles.

Post war, foreign competition and rationalisation of the UK manufacturers led to Scammell coming under the control of Leyland Motors Ltd in 1955.

In February 1987 Scammell learned that its tender for 1522 Military vehicles for the British MOD was successful - but also that the Leyland group had been purchased by DAF BV of Holland. DAF then transferred production of the Military "DROPS" lorries and selected S26 vehicles to the Leyland plant, in Lancashire. It continued production in specialist and military markets until 1988 when the site at Watford, nr London was closed and the last vehicles manufactured under the Scammell name were sold.

Alvis Unipower set up an operation in Watford in 1988 developing trucks and offering ongoing support and spare parts for Scammell vehicles. The new company acquired design & manufacturing rights to several models; the S24 and the Nubian ranges, together with rights to the Crusader and Commander names. 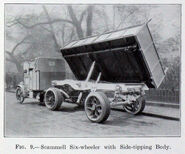 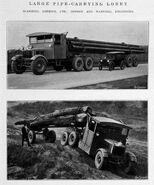 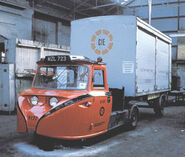 The Trunker used the same Giovanni Michelotti-designed "cheesegrater" fibreglass cab as the Routeman Rigid. It a tractor unit version using Leyland 0.680 or TL11 engines. It was available as 4×2 and 6×2 with a non lifting second steer axle. The chassis from this vehicle saw continued service on the 6×2 Leyland Roadtrain.

This was a 4×2 or 6×4 tractor that used a Motor Panels-supplied steel cab, available in sleeper or day cab forms. It had the option of Detroit Diesel, Cummins, Rolls Royce or Leyland engines.

The Crusader was a popular vehicle within the British Army as a 6×6 wrecker. Many have also seen use in the heavy haulage industry due to their incredibly strong chassis.

The Mountaineer was fitted with a 150 hp. Leyland 680 engine of 11.1 litres. 6 Speed Gearbox, and a 15 ton scammell winch unit for some applications.

Some custom built versions were created for specialist applications. The S24 was modified for use as a Tank transporter, with later Alvis Unipower versions based on the old Scammell design.

In the 1980 a special was built for a Truck show based on the Leyland/ Scammell unit, called ? it was modified to pull wheelies by using huge torque to climb the front of the truck into the air with the rear brakes on, then releasing them once air born. (Fitted with sliding weights in the rear of the chassis to balance the engine out).

There are quite a number of preserved machines in the UK, that regularly are shown at Shows, some are used for moving other show vehicles with low loaders.