Tractor & Construction Plant Wiki
Register
Don't have an account?
Sign In
Advertisement
in: All articles with unsourced statements, Companies founded in 1902, Defunct bus manufacturers,
and 13 more

Adolph Saurer AG was a Arbon, Switzerland (Swiss), based manufacturer of trucks and buses, under the Saurer and Berna (beginning in 1929) brand names, and active between 1903 and 1982. They also manufactured Sauerer engines.

Saurer was a prominent brand all around Europe in the years between World War I and World War II (1918-1939).

In Italy, Officine Meccaniche (OM) was for many years licensee of Saurer engines and other mechanical units, which they used in their own ranges of truck and buses

Saurer trucks were developed along the years into four basic ranges:

It was the B-type that established Saurer's international reputation as builder of long-lasting trucks.

In 1929 Saurer acquired its Swiss rival, Motorwagenfabrik Berna AG of Olten, but the Berna name was allowed to continue, badging the very same Saurer models.

From 1932 on, trolleybuses were a very significant segment of Saurer production. Typically Saurer, or Berna, trolleybuses featured Brown, Boveri & Cie or Société Anonyme des Ateliers de Sécheron (SAAS) electric equipments and Carrosserie Hess bodies. Saurer trolleybuses operated in most of Central Europe countries, and still do it in several of them.

At the World War 2 a restructured type BT 4500 and 5 BHw of Saurer trucks was used to gas people in Nazi extermination camp Chelmno [2].

In 1951 Saurer and its Italian licensee, OM, reached an agreement by which Saurer would market in Switzerland OM's light and medium-weight trucks and buses, using Saurer-OM and Berna-OM badges. This was successful and lasted until Saurer closure.

In 1982 Daimler-Benz had acquired a major shareholding in NAW and soon took full control; and in a short time dropped Saurer, Berna and FBW brands.

The textile and automotive spin-offs

In 1995, Ernst Thomke, reputed Swiss Manager, took over the leadership of Saurer AG in Arbon as Chairman of the Board. To restructure this conglomerate, he had previously resigned his position with its then major shareholder: BB Industrie Holding AG (22%). The previous major shareholder, Tito Tettamanti, of the conglomerate, founded in 1853, specialized in textile machinery and "propulsion technology", had acquired the main competitor in each field, Schlafhorst, with a large manufacturing capacity excess and Ghidela .

Thomke actively led Saurer AG until 1996, when he retired to the direction of the Board until 1999. In his years he promulgated transparency at all levels, flexible working hours, optimized the production and refined accounting systems. In 1996, the group Saurer AG went back into financial results showing profits. More than half of the revenues originating from Schlafhorst, upon its positive restructuring.[citation (source) needed]

Since 2007, the conglomerate Saurer AG, which meanwhile had reached a worldwide leading status in textile machinery, has been integrated into the Oerlikon Corporations Textile division.[3]

Oerlikon-Saurer Textile is the world’s leading manufacturer of technologically sophisticated systems for spinning, texturizing, twisting and embroidery. Saurer Textile brings together eight brand names: Allma, Barmag, Melco, Neumag, Saurer Embroidery, Schlafhorst, Volkmann and Zinser. The products and services of each of these companies play a key role in the value creation process within the textile industry. A high level of technological competence in the field of textile machinery is combined with a consistent client focused orientation providing solutions which offer Saurer customers throughout the world significant advantages in their tough competitive environments.

A Saurer coach in Northern Spain in 1923 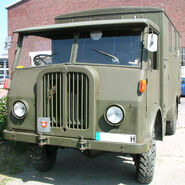 A Saurer trolleybus in Timişoara, 2005 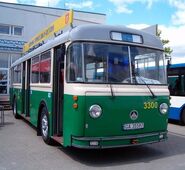 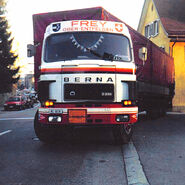 Saurer vehicles are rare in the UK.