Tractor & Construction Plant Wiki
Register
Don't have an account?
Sign In
Advertisement
in: Jaguar vehicles, First automobile made by manufacturer, Cars of England,
and 3 more 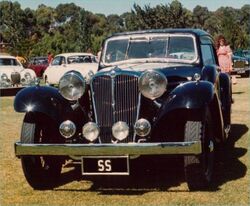 The SS1 was a British sports car first built by the Swallow Sidecar Company in Coventry, England. It was first presented at the 1931 London Motor Show[1] and was produced between 1932 and 1936. In 1933 the company changed its name to SS Cars Ltd and in 1945 to Jaguar Cars Ltd.

The car was initially only made in 4 seater coupé version. In 1933 a tourer was launched. For 1934 the chassis was modified to give a wider track and better front footwells. The gearbox also gained synchromesh. In 1934 a saloon version and in 1935 an Airline coupe and Drophead coupe were added to the range.