Rutland was a brand name used by Manton Motors based at Croydon in Surrey, Motor Traction Ltd and Waggon Rutland of New Addington. The Company was fouded by Frank Manton. Various vehicle models were badged as Rutland, Manton and MTN depending on the market. They were produced between 1947 and 1957. They build vehicle from 1 ton van up to large 4 axle trucks using components from makers such as AEC & Perkins.

In 1954 The Rutland Clipper a 30ft coach chassis was introduced. This 41-seater coach was sold to West Kent Motors. In 1955 two more examples were built.

Most of the companies models had bird related names.

The company ceased trading in 1957 and the premises sold to Dees of Croyden a Ford dealer who retained the Manton Motors name. Manton Motors was then a Chrysler UK (Rootes) dealer for many years.[1]

Made between 1947 and 1957 by Manton Motors of Croydon, Motor Traction and Waggon Rutland of New Addington. Badged as Rutland, Manton and MTN. 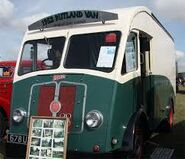 A 1950s RUTLAND Stuka Pantechnicon Diesel 4X2
Add a photo to this gallery
Retrieved from "https://tractors.fandom.com/wiki/Rutland_(brand)?oldid=223165"
Community content is available under CC-BY-SA unless otherwise noted.