B. Ruthemeyer Ltd - (in German B. Ruthemeyer Maschinenfabrik & Eisengießerei) was based in Soest, Germany. The companies history goes back to the 1880s.

The company was founded in 1868 by Bernhard Ruthemeyer sen. as a blacksmith and repair shop for agricultural machinery . From 1888 the smithy operated a steamroller made by the company G. Kuhn in Stuttgart. From about 1905, Ruthemeyer then built their own rolls, first with steam engines drive, a little later (from 1909) with internal combustion engine . In the First World War also street locomotives were manufactured. From 1910 Bernhard Ruthemeyer jun. (Born December 25, 1871, † 1968) the company.

After the Second World War Ruthemeyer threatened the dismantling as the only roller manufacturer of the bizone . Until 1953 steam rollers were produced, a total of almost 1000 pieces.

The activities of the company Ruthemeyer were continued by the former Wiesbadener Glyco AG with the Essen branch on the Stauderstraße, but soon ended the production of road roller components, and the Essen plant was abandoned by the Glyco and the activities for the production of mechanical components and plain bearings moved to Brunswick. The know-how to road rollers can still be found in a few employees of the Braunschweig metallurgical plant, a former Glyco subsidiary.

Several example survive in Europe, with 3 examples known in the UK.[2] 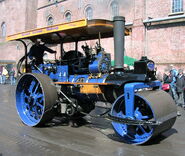 Dieselwalze, Bj. 1959
Add a photo to this gallery

This article incorporates information from the equivalent article on the German Wikipedia.

Retrieved from "https://tractors.fandom.com/wiki/Ruthemeyer?oldid=221755"
Community content is available under CC-BY-SA unless otherwise noted.