This engine was dispatched from the Lincoln works of Ruston Proctor to H.V. McKay Australia on 31st March, 1911. and was used as their demonstration engine for quite a time. It operated at 180 p.s.i. After some years she was purchased by J.P Doherty for work in his Grange Road, Fairfield Quarry. The working pressure was reduced in 1928 to 120 p.s.i as some repairs were needed. This was done in 1932. Upwards of 100 new firebox stays were fitted by Messrs George and George and the engine was then allowed to work at 160 p.s.i. She was brought to Dardanup Heritage Park in August, 2000 and is now finally undergoing a full restoration.

18th February, 2014. Work slowly progressing. We have had her up to 180 p.s.i several times now. We have fixed a few leaks and made a number of adjustments. We have driven her around the yard three or four times. On a few occasions we had a sort of steam lock up. We have been unable to work this out so we have removed the valve chest and made a check of the valve timing. We did some more research, checked the drawings again and then reset the timing taking in to account lap and lead. We have never been able to get the injector to work so we have sent this away for it to be serviced and a new set of cones to be made. We are still awaiting the return of the injector before we fire her up again. The engine is also fitted with what appears to be 'an after market' water pump. We are not happy with the reliability and performance of this and so we have decided to wait until we can refit the injector and can be confident that we can comfortably maintain the boiler level as it should be.

Photos of Ruston Proctor no. 40909 & Other interesting exhibits at the Dardanup Heritage Park, e stern Australia Add your photos here; 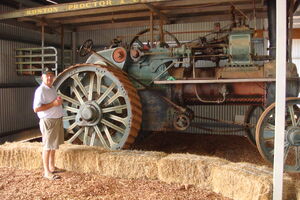 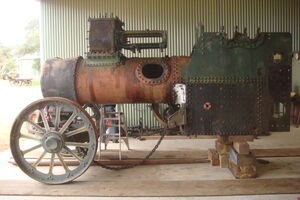 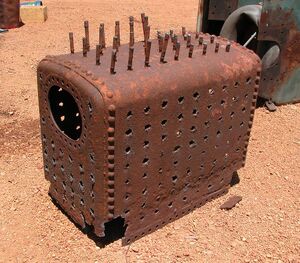 It was a very hard and tedious job removing the old firebox. Ray and Greg worked hard on this. A new one will be made and also a new front throat plate. 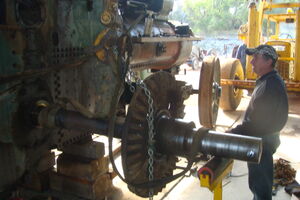 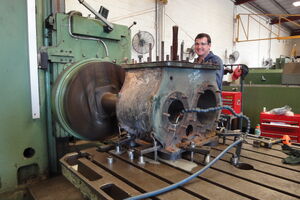 Chris machining the cylinder block on a horizontal borer. 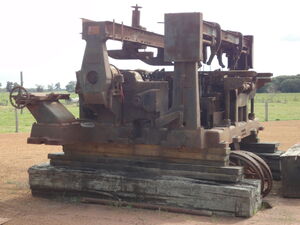 Who knows what this machine is ?
Come and see it at Dardanup Heritage Park and see if you can work out what it does. 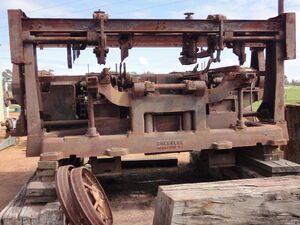 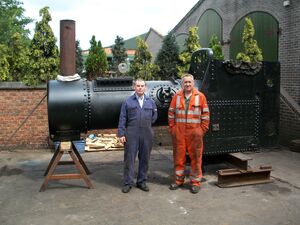 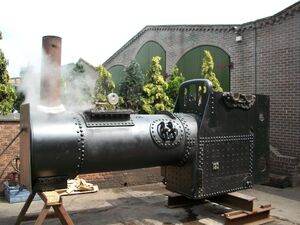 1st July, 2011 Hunslet Steam Co. Leeds England. After many years Alan and Richard have some steam in the boiler after fitting a new firebox, smoke box and repairs to the hornplates. 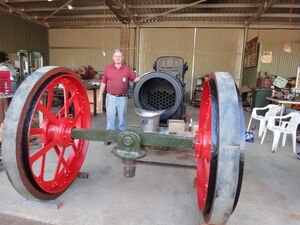 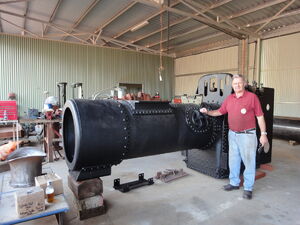 The boiler just back from England, with the new cast chimney base. 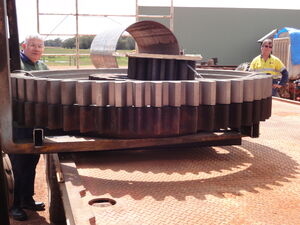 Jeff with the new and old compensating gears. 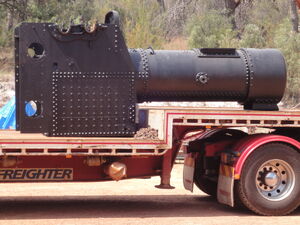 After many dollars, 12 months and some anxious times, safely back in our yard at Dardanup at last.
Add a photo to this gallery

Retrieved from "https://tractors.fandom.com/wiki/Ruston_Proctor_no._40909?oldid=168354"
Community content is available under CC-BY-SA unless otherwise noted.