Ruston Proctor no. 33189 is an traction engine that was built in 1907 by Ruston, Proctor and Company of Lincoln. 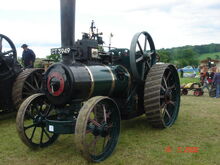 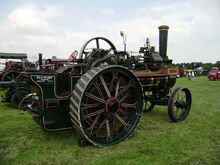 At Elvaston 2009 in the working area

Driving the saw at Elvaston 2009

Retrieved from "https://tractors.fandom.com/wiki/Ruston_Proctor_no._33189?oldid=78636"
Community content is available under CC-BY-SA unless otherwise noted.