The Rover 200 Series, and the later Rover 25, were a series of Rover-branded compact cars produced by the Austin Rover Group, and latterly the Rover Group, MG Rover and Roewe.

There have been three distinct generations of the Rover 200. The first generation was a four-door saloon car based on the Honda Ballade. The second generation was available in three or five-door hatchback forms, as well a coupé and cabriolet (in relatively small numbers). Its sister model, the Honda Concerto was built on the same production line in Rover's Longbridge factory. The final generation was developed independently by Rover on the platform of its predecessor, and was available as a three or five-door hatchback. After the sale of Rover in 2000, and following a facelift, the model was renamed and sold as both the Rover 25 and MG ZR. Production ceased in 2005 when MG Rover went into administration. Production rights and tooling for the model, but not the Rover name, now belong to Chinese car manufacturer Nanjing Automotive.

The original Rover 200 (sometimes referred to by the codename SD3) was the replacement for the earlier Triumph Acclaim, and was the second product of the alliance between British Leyland (BL) and Honda.[2] Only available as a four-door saloon, the 200 series was intended to be more upmarket than the company's Maestro and Montego models, which the 200 Series came in between in terms of size.

The Honda-badged version was the first Honda car to be built in the United Kingdom (the Honda equivalent of the 200 Series' predecessor, the Triumph Acclaim, was never sold in the UK). Ballade bodyshells, and later complete cars, were made in the Longbridge plant plant alongside the Rover equivalent, with the Ballade models then going to Honda's new Swindon plant for quality-control checks.

This model of car is well known as Richard and Hyacinth Bucket's car in the BBC Television sitcom Keeping up Appearances (1990–1995). Early episodes show a light blue 1987 216S, but later episodes feature a 1989 216SE EFi model (re-badged for continuity as a 216S, and with the same numberplate).

The R8 Rover 200, sometimes referred to as the Mk 2 Rover 200, was launched in 1989. Unlike the Mk 1, Ballade-based, 200, this model was a 5 door hatchback designed to replace the Maestro while the saloon variant, called 400, was the replacement for the Mk 1 200. The 400 had a different nomenclature to the 200 because at the time many saloon versions of compact cars were positioned slightly upmarket from their hatchback siblings, often featuring higher specification and prices, in addition to different names. The 200 also spawned 3 door hatchback, coupe and convertible versions, while the 400 spawned an estate version. These variants were solely Rover designed and produced products, with no Honda version available.

The R8 200 was the first car to be introduced by the newly privatised Rover Group. Once again, the model was designed in collaboration with Honda (who produced the new designed-for-Europe Concerto model) and both models would share production lines at Rover's Longbridge facility. The 200 and Concerto itself were based on the 4th generation EC Honda Civic, of which the 3dr, coupe CRX and saloon versions were sold in the UK (meaning that Honda had effectively 2 different saloon models of the same car in the same class).

Also available were two PSA (non-electronically controlled Lucas CAV injection pumps) Indirect injection diesel engines, with the choice of naturally aspirated 1.9 litre XUD9 or turbocharged 1.8 XUD7T engines. They were class leading in their refinement in Peugeot and Citroen installations, but less refined in the Rovers. These engines were installed instead of the non-electronically controlled Bosch HPVE Direct Injection Rover MDi / Perkins Prima used in the Austin Maestro and Montego, because that engine with its noisy combustion but lower fuel consumption, was deemed too unrefined for the new models. The Rover 200 was produced alongside the a basically equipped Maestro, giving buyers a choice of a refined and up to date diesel or a less refined, obsolescent but competent value for money car. Because the R8 diesel used Lucas fuel injection rather than Bosch, it is less suitable for vegetable oil fuel, even though the XUD itself is one of the best engines for it.

In 1992 the 200 received a mild facelift, featuring redesigned front indicator lights, but unlike its 400 sibling, which was also facelifted at the same time, the car did not feature a new grille (which Rover reintroduced on the 1992 R17 facelift of the Rover 800) or new body coloured bumpers. This led to some owners retro-fitting the 400's new grille on to the 200. In 1993 Rover finally added the new grille and body coloured bumpers to the 200 range.

The Rover 200, codenamed R3, was smaller than the Honda-based R8 cars. This was due to Rover's desperate need to replace the ageing Metro, which by now was 15 years old. Although some elements of the previous 200 / 400 were carried over (most notably the front structure, heater, steering and front suspension), it was by-and-large an all-new car that had been developed by Rover. Honda did provide early body design support as a result of moving production of the Honda Concerto from Longbridge to Swindon, freeing up capacity for 60,000 units at Rover. At this point, the car had a cut-down version of the previous car's rear floor and suspension and was codenamed SK3.

Lack of boot space and other factors led to Rover re-engineering the rear end to take a modified form of the Maestro rear suspension and the product was renamed R3. By the time the car was launched, Honda and Rover had already been "divorced" after the BMW takeover the previous year. The new 200 used K-Series petrol engines, most notably the 1.8 L VVC version from the MGF, and L-series diesel engine. During the mid 1990s the L-Series was a very competitive engine, regarded as second only to the VW TDI in overall performance, and an improvement over the R8s XUD, particularly in fuel economy while almost matching it for refinement.

The R3 featured a completely re-designed interior and dashboard to accommodate the fitment of a passenger airbag in line with new safety standards.

The 1.8-litre models earned a certain amount of praise for their performance, whilst the intercooled turbo diesel was claimed as one of the fastest-accelerating diesel hatchbacks on the market in the late 1990s.

Unlike its predecessor the R3 was not available in Coupe, Cabriolet or Tourer bodystyles. although Rover updated these versions of the older model with mild styling revisions and the fitting of the new dashboard from the R3, which was possible due to the shared front bulkhead. In the UK, these models were no longer branded as 200/400 models, simply being referred to as the Rover Coupe, Cabriolet and Tourer.

The Rover 200 might have been marketed as a supermini, it compares closely in size and engine range with contemporary models such as the Ford Fiesta and Vauxhall Corsa. Instead Rover priced the car to compete with vehicles like the Ford Escort and Vauxhall Astra. Rover's only offering in the supermini segment at the time was the ageing Metro and this gap in the company's line-up needed to be filled.

The third generation 200 was initially popular, being Britain's seventh-best-selling new car in 1996 through to 1998. Within three years it had fallen out of the top 10 completely and was being outsold by traditionally poorer selling cars like the Volkswagen Polo Mk3 and the Peugeot 206.

The Rover 200 BRM was first shown at 1997 Frankfurt Motor Show, the reaction from the press and public was good enough that after a year of development the Rover 200 BRM LE was officially launched at the British Motor Show in October 1998. It was based on the range-topping Vi model but with 1960's BRM styling cues. The engine was the familiar 145 PS (107 kW) 1.8-litre VVC K-Series.

Inside, there was red quilted leather seats and door panels, red carpet, seat belts and steering wheel. Alloy heater controls and turned aluminium trim complimented this. On the outside, there was Brooklands Green paintwork, with silver trim details, large 16" alloys, and an exclusive woven mesh grille sat above a huge orange snout in the front bumper, which was the BRM trademark nose on all of its 1960s Formula One racing cars.

Technical adjustments consisted of 20 mm (0.8 in) lower ride height over the Vi and improved damping and handling, a close-ratio gearbox with a TorSen differential further developed from the Rover 220 Turbo, reduced torque steer and improved straight-line stability.

The price was £18,000, excluding extras such as air conditioning, passenger airbag and a CD player. There were only 795 built for the UK, with an additional 350 for overseas markets. The steep price was originally slashed to £16,000 and when the Rover 25 was launched, this was cut to £14,000 to get rid of vehicles still lingering in showrooms.

The NCWR organisation (New Car Whiplash Ratings) tested the Rover 200 and awarded it the following scores:[4]

The Rover 200 received moderate to good reviews from the motoring press.

A face-lifted version, renamed the Rover 25 (internal codename Jewel) was launched in autumn 1999 for the 2000 model year. This version used similar frontal styling to the larger 75 model. The chassis had been uprated to give sportier handling (suspension and steering setup from 200vi) and the front end had been restyled to give it the corporate Rover look first seen in the range-topping 75, a number of safety improvements and interior changes were made, but the 25 was instantly recognisable as a reworked 200 Series. The 1.4 L, 1.6 L and 1.8 L petrol engines as well as the 2.0 L diesel were all carried over from the previous range. CVT automatic gearboxes were carried over from the R3 200, with 'Steptronic' (later 'Stepspeed' post-BMW demerger) semi-automatic system available from late 2000. R65 manual gearboxes were again carried over but were later superseded by Ford 'IB5' units in mid-2003.

Less than a year after the Rover 25 was launched, BMW sold the Rover Group to the Phoenix consortium for a token £10. By the summer of 2001, the newly named MG Rover Group had introduced a sporty version of the Rover 25: the MG ZR. It had modified interior and exterior styling, as well as sports suspension, to give the car the look of a "hot" hatchback. The largest engine in the range was the 1.8 VVC 160 PS (118 kW/158 bhp) unit, which had a top speed of 210 km/h (130 mph) . It was frequently Britain's best-selling "hot hatch".

In 2003, Rover made a version of the car with increased ride height and chunkier bumpers, called Streetwise. The car was marketed by Rover as an "urban on-roader". They also introduced a van version of the 25 called the Rover Commerce.[8]

By 2004, the age of the Rover 25 / MG ZR's interior design in particular was showing, so MG Rover gave the cars an exterior restyle to make them look more modern. The majority of changes however were focussed on the interior, which featured a completely new layout and fascia design. Production of both cars was suspended in April 2005 when the company went into administration. In March 2005 the 25 won the "Bargain of the Year Award" at the prestigious Auto Express Used Car Honours: "The compact hatchback was recognised by the judges for the availability and affordability that help make five-year old examples an attractive purchase proposition."

Specifications for the Rover 25 design were purchased by Shanghai Automotive Industry Corporation in early 2005, though new MG Rover Group owner, Nanjing Automobile Group now owns the tooling for the car. In 2008, the Streetwise, rebadged as the MG 3SW, was relaunched in China.[9]

The Rover 25 was actually Britain's best selling new car for the month of April 2000, due to a brief surge in sales among buyers wanting to support the company at the time of their sell-off by BMW.[citation needed] 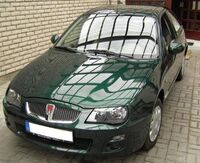 The 25 underwent the Euro NCAP car safety tests in 2001 and achieved the following ratings:[10]

The Rover 25 received mixed to good reviews from the motoring press.

These were the engines available for the Rover 200 (1995–1999) and Rover 25 (2000–2005). Each engine was modified at regular intervals throughout its life with economy and emissions improving with the changes.