The Riverside Steam and Vintage Vehicle Rally was held near Southport in Lancashire at the "Riverside Holiday Park" at nr. Banks south of Preston.

The 2009 Event is the First at this venue. The organisation was in the experienced hands of local steam rally & events veterans, Alan Atkinson (as seen hauling Fred Dibnah's engine for TV appearances), Peter Wareing, John Johnson (steam engineering) & William Hunter (a supporter of HCVS events). The event is help on the Park of Harrison Leisure Ltd, Riverside Holiday park. And featured a traditional Steam fair with a wide range of other entertainment to keep all interests entertained. A large commercials section & selection of Military vehicles and Heavy haulage tractors. An unusual feature was the sale of local grown produce by HunterPac of Preston with the proceeds all going to charity (the area being home to many a fertile market garden who supply the supermarkets nation wide with produce.

The 2011 event featured display was of both of Fred Dibnahs engines and his Land Rover which has been restored. This is the first event the vehicles have been shown at since Freds death and the subsequent forced sale of Freds restored Aveling & Porter tractor by Cheffins Auctioneers sale to Michael Oliver from Cheshire.

The Weekend was again blessed with brilliant sunshine & a good turnout of vehicles. Exhibit numbers were a little down on last year & a lot were the same, but a few new gems were to be seen in the Steam, Heavy haulage and car sections.

The Howard Brothers Steam Fair with Renown was again providing the fairground rides.

The catering section had been expanded for 2011 giving more choice and seating in the Tea tent area.

Another great show from this team with a few changes to the layout. Some worked better others not so well. Apparently it was oversubscribed with entrants, but a few more could be squeezed in inplaces or the others could be spaced out slightly, as the trucks were a bit tightly packed with the tractors also a little tight. Cars were abit thin but apparently there were a number of Sunday only entries in that class.

The lack of a program was disappointing, and a basic list of entries could be offered instead of a full programe. Hopefully this will be resolved for 2011.

The 2010 event was blessed with a glorious sunny day on the Saturday. The site layout was revised from the first event, with the Cars and tractors moving to by the entrance and the stalls behind them (were the commercials were last year). Steam moved to either side of the road way behind the Fair and food court that stayed in the central location. Heavy haulage moved beyond the steam to the top of the site but adjacent to last years location. Commercials were along the roadway above the caravan park (were the steam and cars had been in year one). The Buses were absent and a local Motorcycle club was in the area opposite the Toilet block near the vehicle entrance.

As no Guide was published this year we will be unable to list the owners of the various vehicles in most cases.

For some reason the Events guide did not list the steam exhibits ?, so this list may be incomplete.

A large number of commercial vehicles were present mainly in 2 rows with a decent width central walkway. A few were a bit tightly parked together but in general were spaced out better than a lot of events.

The heavy haulage units were in a separate area.

Note: Few entries displayed the entry numbers clearly or any details about the vehicles past history or restoration.

Section not photographed, - please add your photos from the event

A few exhibits were photographed & will be added later.

Most exhibits had little info say what they were as usual. 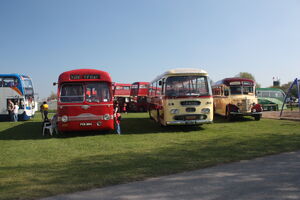 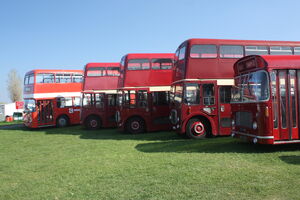 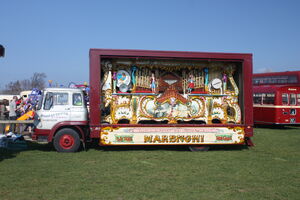 A rather large box for the Howard Bothers engine Fowler no. 15653
Add a photo to this gallery

Retrieved from "https://tractors.fandom.com/wiki/Riverside_Steam_and_Vintage_Vehicle_Rally?oldid=175094"
Community content is available under CC-BY-SA unless otherwise noted.