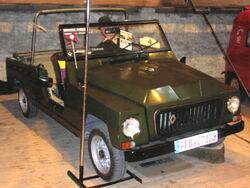 The Renault Rodeo is a series of small open-top automobiles produced between 1970 and 1987 by ACL, later called Teilhol, for Renault. In total there were three generations of the Rodeo. At first the car was called ACL Rodeo and the name was changed to Renault Rodeo in July 1976. Car was front wheel drive but could be ordered also with four wheel drive technic supplied by Sinpar.

The original Rodeo 4 was based on the platform of the Renault 4 van, with an 845 cc engine.

A new model with a smaller and entirely new body replaced the Rodeos 4 and 6 in 1981, simply called the Rodeo. A limited series of all wheel drive versions were built in 1984 only, called the Rodeo Hoggar.

The Rodeo name was also used by Renault in Argentina to designate a local variant of the Renault Trafic (1st. generation), which had a flat rear chassis and a flatbed with dropping sides and rear (similar to a pick-up). The flatbed was designed to be removable, allowing Rodeo buyers to use it as a rolling chassis for mounting specific rear compartments.

Retrieved from "https://tractors.fandom.com/wiki/Renault_Rodeo?oldid=214263"
Community content is available under CC-BY-SA unless otherwise noted.