The Reliant Rialto is a three-wheeled, subcompact car that was manufactured by Reliant Motor Company, replacing the original Reliant Robin in 1981. The Rialto was discontinued in 1998 while production of a new Robin model, introduced in 1989, continued. The Rialto was made in three different body types: saloon, estate and panel van.[citation needed] With a galvanised chassis and a fiberglass body, the Rialto was very resistant to corrosion.[1] It was powered by Reliant's 850 cc aluminium water-cooled engine[1] and, with the improved aerodynamics of the new body style, was a much more stable vehicle at speed. New to the Rialto was the single windscreen wiper, centrally located to clear the whole screen.[citation needed]

A number of examples are owned by enthusiasts and appear at car shows and similar events. 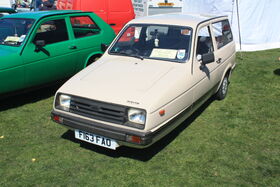