The Ransomes MST 56 was a trailed combine harvester built by Ransomes, Sims and Jefferies of Ipswich, England. It went into production in 1956 after being developed from the Ransomes MST 42 combine a design built under license from Bolinder-Munktell of Sweden. The Ransomes MST 56 was powered by the PTO from the pulling tractor. The combine was of the bagger type or could be fitted with a grain tank and was designed for smaller farms. The Drawbar swung across to reduce transport width on the road and for field access through a 8 foot gateway. Output was up to ? tons per hour, and the Ransomes MST 56 remained in production until 1961 when it was dropped as sales of trailed models had declined significantly. When introduced in 1956 it cost £ 685 pounds.[1]

A prototype was built with a mounted engine as produced by International Harvester and Massey-Harris but never entered production.

A few examples have been stored away for occasional use by farmers and have started to appear on the vintage show circuit having been bought at farm dispersal auction sales as a unusual exhibit to have behind the tractor, or exhibited by retired farmers. 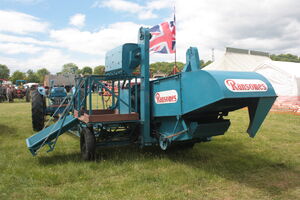 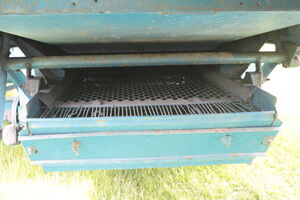 Retrieved from "https://tractors.fandom.com/wiki/Ransomes_MST_56_combine?oldid=218143"
Community content is available under CC-BY-SA unless otherwise noted.