R.H. Neal & Co Limited were an early crane manufacturer as well as other original machinery based in Grantham, Lincolnshire and were taken over by Coles Cranes in 1959. The companies most famous product to most people was the Pelican Loader used in coal yards. But a common machine that was seen on street works & sewers before modern hydraulic excavators became common place for lifting was the portable crane.

RH NEAL & COMPANY LIMITED its original fullname were designers and manufacturers of early machinery that originally started in a small factory based at Ealing in London starting around 1926. Their machines were basic models aimed for the agriculture, construction industries as well as the British railways. The original NEAL models were little more than early patented petrol-engined trenchers and site dumpers mostly based on 1930s tractors parts and railway wagons were also produced. Later Neal developed an early new model that resembled a four wheeled platform with a drivers cab, had a pair of winches attached to a long steel jib that was an instant success for many firms that worked in pipes and sewers cleaning/maintenance services across the UK that found it light and very useful to operate and was towable by a small tractor or truck. This new model was one of their biggest-selling machines of the early days during the 1930s-1940s. The firm purchased larger premises in Dysart Road at Grantham in 1937 for the manufacture of cranes.

Then came their first entirely developed yardcranes for lightwork and then came their heavier original mobilecranes still using petrol driven car engines of which they all became a very common site in factories, stockyards, warehouses and construction sites. From the 1950s their famous new model to most people was probably the well known Pelican Loader used in coal yards only this time could be bought with a choice of both an improved Ford petrol car engine or a more common Fordson Diesel tractor running gear. By this time all the agricultural side of the business was abandoned in favour of the new Neal Pelican Loader that was selling quickly like hotcakes in bakery and the entire production was carried alongside the new Neal mobilecrane and yardcrane models. The firm was very active for the next 20 years with a small original yardcrane model range before more modern hydraulic excavators became a more common equipment arrived after the 1970s.

After Coles Cranes Limited acquired the RH Neal & Co Ltd only standard mobilecranes and crawlercranes were developed and manufactured under a NEAL reduced model range.

The Neal name was used up till 1970 when all the Steels Cranes operations were re-named under the Coles Cranes brand.[1]

Historically speaking, R.H Neal & Co Ltd entered started a technical engineering agreement with the North American UNIT company better known for their excavators of all sizes and types, to develop their improved hydraulics and mechanicals, so that NEAL would licence produce the current original UNIT model range for the massive European market and then UNIT would acquire an export base for the UK. In a very similar way that Yorkshire based NCH firm planned, that later became known as NCK. In 1960 the American UNIT original machinery were licence produced in England by the RH Neal & Co Limited at Grantham mostly Crawler cranes and Draglines then were sold in Europe under the tradename NEAL-UNIT these were also available as excavators, mobile cranes, pile drivers and yard cranes.

RH Neal & Co Limited closed in 1985 but the premises, some selected models and the factory were gradually taken over by Coles Cranes Limited .

They still kept production all the same but only made selected medium sized mobilecrane and small yardcrane models of their own later for Coles Cranes bought them until around 1970.

The Neal name was used up till 1970 when all the Steels Cranes operations were re-named under the Coles Cranes brand.[2]

1923 They were appointed sole concessionaires for the Austin Machinery Corporation.

1961 General engineers and makers of mobile cranes from half-ton to ten tons.

Note:Dates are publication dates for Brochures on the machines.[3]

Note:Dates are publication dates for Brochures on the machines.[4]

A 1930s NEAL Digger-Trencher on crawlers

A 1940s Neal QM mounted on a Thornycroft Diesel cranecarrier 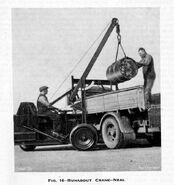 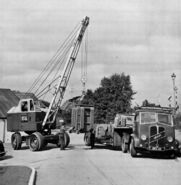 A 1960s Neal Pelican Loader was Fordson tractor based 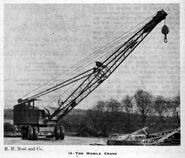 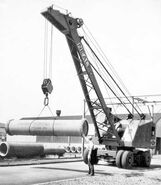 A 1970s Neal Pelican Excavator was also Fordson tractor based 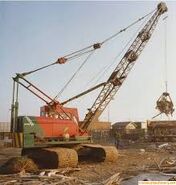 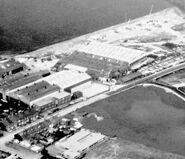 Very few Neal machines are seen on the preservation circuit in the UK. A number of machines still exist in yards of old machinery, but as these get sold for redevelopment a lot are fast disappearing, as cranes are not a common item to collect.

Retrieved from "https://tractors.fandom.com/wiki/R_H_Neal_%26_Co?oldid=223776"
Community content is available under CC-BY-SA unless otherwise noted.